ZTE Nubia Z11 was a most widely sold smartphone in India and around the world. The ZTE Nubia Z11 mini is an attempt to launch a smaller screened phone with almost same cutting edge features as in the predecessor.

The ZTE Nubia Z11 mini specs include an Android Lollipop operating system along with the Nubia UI 3.9.6. This is housed on a Qualcomm MSM8952 Snapdragon 617 chipset along with an Octa-core (4x1.2 GHz Cortex-A53 & 4x1.5 GHz Cortex-A53) processor for unmatched performance. The unmatched graphic and seamless android experience is powered by an amalgam of 3GB RAM and an Adreno 405 GPU.

The 8MP selfie shooter has an aperture of f/2.4 and can record videos of 1080p resolution.

The ZTE Nubia Z11 mini features a 5-inch IPS LCD touchscreen that features multi-touch  that has a screen to body ratio of 69.9%. The screen manages to deliver a display output of 1080 x 1920 pixels with a pixel density of 441 pixels per inch.

The ZTE Nubia Z11 mini’s long battery life is credited to its 2800 mAh non-removable battery. The battery could have been on to the higher side, as competitive products at the same price range offer bigger batteries.

The ZTE nubia Z11 mini comes with an internal storage capacity of 64GB and can support the use of expandable memory up to 256GB using the SIM card II slot.

The ZTE Nubia Z11 mini s price in India is priced around 13,000 rupees and for this price the features and specs it gets to the table are far more than satisfactory, that makes it a good buying choice. The ZTE Nubia Z11 minicompetes with Mi Max, Asus Zenfone 2 Laser 3GB Ram,Coolpad Note 5 and Gionee Elife E6. 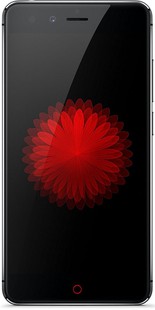 Rating:
None Out of 500 reviews