ZTE mobiles is a fairly new competitor in the smartphone race in India. The ZTE Axon 7 was one of the major hits that the country has seen. For, ZTE mobiles has the perfect blend of pricing and providing state of the art specifications.

ZTE Nubia N1 specs of the processor are impressive and is reasonably priced. The phone comes with a Mediatek MT6755 Helio P10 chipset and an Octa-core (4x2.0 GHz Cortex-A53 & 4x1.0 GHz Cortex-A53) processor. The phone’s high speed multitasking and computing are powered by a 3GB RAM unit and a Mali-T860MP2 GPU.

The ZTE Nubia N1 mobile price is partly attributed to the spectacular design and display along with the metal unibody structure. The 5.5-inch LTPS IPS LCD capacitive touchscreen has a screen to body ratio of 73.3%. The screen gives out an output of 1080 x 1920 pixels with a pixel density of 401 pixels per inch.

The ZTE Nubia N1 comes with an internal storage space of 64GB and supports the use of expandable memory up to 256GB. The lack of the presence of the dedicated memory card slot is felt as the memory card uses the SIM card slot II

The ZTE Nubia N1 battery is a large 5000mAh one. The battery has a standby of 480 hours and a music playback time of 70 hours and talktime of up to 25 hours. The battery specification is very impressive for the price it comes with.

The ZTE Nubia N1 price in India is around 18,000 rupees and at this price it competes with the with the Mi Max Prime, OnePlus x, and Moto X. The phone is a good buying choice considering its powerful camera unit, RAM, storage and processor specs. 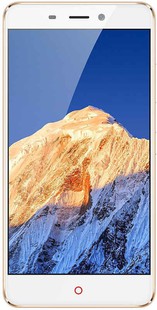