Zen an Indian-based mobile company that brings affordable mobile phones to the Indian population. The Zen 105 Max price is INR. 2090 only and it comes with a bunch of features to offer. The uniqueness of this smartphone is its appealing appearance in vivid colors.

The Zen 105 Max features a storage capacity of 512MB and additional storage on a microSD card up to 32GB. The battery of 1250mAh capacity gives you the freedom to use the phone for long hours. Talking about the performance, it works on a single core processor that works at 1.4GHz speed, which is pretty fast. The device is powered by Android KitKat v4.4.4. The primary camera of the phone is 2 Megapixel that comes with an LED flash. The phone supports dual-SIM and it is 3G compatible.

Coming to the design of the Zen 105 Max, it has a sleek lightweight body. The overall look of the phone is modern. The display screen of the phone is 3.5-inch and of HVGA type. The screen resolution is 320x480 pixels for good readability.

The Zen 105 Max is extremely affordable and you get plenty of features on it. It is a good choice of phone to buy, especially if you need a 3G device at the lowest rate possible. 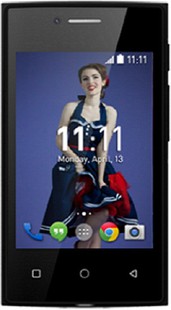