Xiaomi Redmi Note 3 is synonymous with being first. It ushered in the first ever Snapdragon 650 in the world, a large battery of 4050mAH, a metal body that was a new thing for Redmi and much more. No doubt, this became an instant hit on introduction. The high performing Snapdragon 650 uses the ARM’s Cortex A72 cores in order to open apps in less than a second. Paired with this is the hexa core processor that clocks at a speed of 1.8GHz. You can have an awesome gaming experience on this phone as it uses the next generation Adreno 510 graphics processor. And even if this has a metal body, it is extremely light and ergonomic, it weighs only 21 grams. The camera boasts of a Phase Detection Autofocus or PDAF, which is characteristic of DSLR cameras. The pairing of 16MP along with ISP processing calls for crisp and crystal clear images. Another very interesting feature of this phone is the Sunlight Display that is smart enough to adjust the brightness and contrast on the basis of the environment that you are in. Additionally, it has both Night mode and Reading Mode, which makes it less harsh on your eyes. You can get the 16GB one at INR 10, 466. 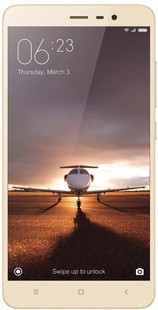