Vodafone Smart N 8 has already created a buzz in the smartphone market especially in India which has over 50 million smartphone user. The USP for this phone would be its price. The phone comes with a Quad-core 1.3 GHz Cortex-A53 processor backed up by 1.5 GB RAM. The phone runs on the latest Android 7.0 Nougat. Surprisingly the phone has only 5.0-inch touchscreen display which might upset few users.

Some other features include:

Vodafone Smart N 8 has only 1.5 GB of RAM which is not sufficient nowadays. The phone might lag while playing games or HD videos. Multitasking would not be smooth and User can feel the transition delay. Running multiple apps in the background would impact the overall performance of the phone. It is a single sim Phone (GSM only).

Vodafone Smart N8 has a Quad-core 1.3 GHz Cortex A53 processor which is pretty decent. It is paired with a MediaTek MT6737 chipset. Under the hood, this phone has only 1.5 GB of RAM which would impact the overall performance of the phone.

Vodafone Smart N8 comes with a 13 MP primary camera with LED flash light and 5 MP of front camera for selfies. High definition video recording is available in 1080p at 30 frames per second. Other feature includes Geo tagging and support for multi-mode image capture.

Vodafone Smart N 8 has a 2400 mAh non-removable Li-Ion battery. It can provide a user 26 hours of talk time, 40 days of stand time and 13.5 hours of internet surfing.

Vodafone Smart N8 has an inbuilt memory of 16GB. External memory slot support is yet to be confirmed.

Vodafone Smart N 8 looks okay in this price spectrum. It could be better if it comes with another variant having 3-4 GB RAM and a dual sim slot. Rest everything looks fine. One can go for this phone if he/she does not play many games or use multiple apps at a time. The camera is pretty decent, screen resolution also looks fine.

Vodafone Smart N8 full specs and reviews as of Oct 2021. Buy it here! 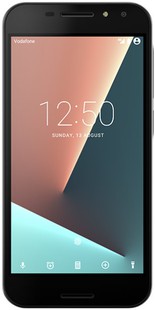