Symetium has now on their official Twitter handle spoke out that the project has not been killed but is facing temporary block. The founders have confirmed that they are on the lookout for investors and would be continuing their project of delivering a smartphone that has a potential of replacing a computer. Stay tuned for more inputs on Symetium Smartphones.

Symetium is a mobile manufacturing company founded in September 2013. With the idea of creating an entire PC in a handset, the company has announced its new mobile Symetium 6GB which has been getting a lot of attention lately. The ‘smartphone PC’ Symetium release date in India is expected to be around January 2018. Let’s go into the details of this Symetium mobile specifications.

The Symetium mobile features a high-end Qualcomm Snapdragon 820 Octa-core processor coupled with 6GB RAM. With this configuration, friction in phone performance will be a . The phone boots on Android v6.0 (Marshmallow).

The Symetium smartphone sports a huge 24MP primary camera with Geo-tagging, Autofocus, Touch focus, Digital Zoom, Face detection. The front camera of the Symetium is a 5MP shooter. Overall, the camera specifications would be pretty impressive on this one.

The Symetium mobile is powered by a mammoth 4000 mAh non-removable Li-ion battery which might last up to two full days considering its Snapdragon 820 processor. Well, that is what the brand claims. The Symetium supports wireless charging as it comes with a Docking Station. You just have to rest your phone on the deck and it starts charging right away.

Weighing about 150 grams, the Symetium comes in four : Black, Blue, Red, and White. With dimensions around 130x63x6mm, the Symetium comes with an OLED display of 1920x1080p screen resolution. The 5-inch capacitive multi-touch screen has the pixel density of 441 ppi. With a Full HD resolution and a huge 441 ppi when compared to the average 220 ppi, the Symetium promises a mind-blowing display.

The company didn’t compromise on anything as every Symetium smartphone specification is talk-about a lot. Reported to come with a 6GB RAM and 64GB internal memory, which can be expandable up to 256GB via microSD card.

Other features of the Symetium include a Light sensor, a Proximity sensor, an Accelerometer, and a Gyroscope. The phone has a USB Type-C connector. The main agenda of the Symetium is to kill the gap between a mobile phone and a personal computer. Symetium’s founder Jonathan Gustafsson said that a phone need not be a phone anymore but a device which can be convertible into a PC at our wish. With attaching a mouse and a keyboard, users can run this phone as a PC running on Windows. The Symetium price in India is expected to be around Rs 39500.

Why should you wait for Symetium mobile release in India?

If you are ready to spend a big bundle, then think no more. This is a perfect phone for those planning to buy a high-range mobile. Although there are other brands which offer high-end phones with awestruck features, the Symetium phone stands out for its ability to act like a full-time PC when needed. Also, the 6G RAM phones are still a dream for many mobile makers. So, think about it.

The Symetium mobile surely looks like it will create an impact for itself. But the impact sound enough to make a breach considering the fact that the OnePlus 5, Essential Phone and Asus Zenfone AR are going to stand their ground in this space of smartphones. Symetium is no longer the phone that can revolutionize the market with its high capacity RAM. The concept of introducing 6GB RAM on phones was the USP of Symetium and the OnePlus 5 has taken it all from it, by introducing 6GB and 8GB RAM variants. So much for delaying the Symetium 6GB RAM release date in India.

Why should Symetium mobile come with 5G network support?

> At MWC 2018, Qualcomm demoed in a simulation that how fast can a 5G mobile phone be able to perform. The simulation showcased that about download speed increased 20 times over 4G speed. The 5G revolution could happen with the Symetium mobile in 2018.

> Symetium 8GB RAM smartphone must be in the making if this company wants to beat the likes of OnePlus 5 and Asus Zenfone AR. Cuz 6GB RAM trend is old! Are you still waiting for a Symetium smartphone in India? Well, we are too to see any new announcement from the brand.

> The Symetium mobile release has been extended and this was a window of opportunity that other mobile manufacturers have taken to come up with their products in the 6GB rally. Manufacturers like Coolpad, Xiaomi, and OnePlus have joined this and the latest OnePlus 5T will be featuring 8GB RAM and this is definitely a set back to this idea.

> With CES 2018 event around the corner, Symetium might be unveiling their Mobile PC dream in Las Vegas. Would you buy a Symetium mobile with 8GB RAM? Well, who wouldn't! But more than the highest RAM phone, Symetium mobile must introduce more unique features on their upcoming phone.

> Even if this is out in India, the fate of the Symetium mobile depends on how aggressive the cost of ownership is. Meaning? If Symetium mobile price is made affordable, compared to the competition. Then, only this Symetium 6GB RAM mobile phone will have the potential for sales in India.

> Symetium mobile is a marvel of its kind, the company should think before killing the expectations of the users.

What's the fate of Symetium mobile in India?

Unfortunately, there is no news from the makers of the Indigogo campaign of Sytemtium mobile. It is unknown for far whether it will be launched at all or not. If that's the case, the Sytemium smartphone will go down in history as a failure. And an inspiration also for other manufacturers.

The primary reason why it makes sense to introduce a mobile that can be converted for the desktop experience is because world is changing. In future, we may need not to carry mobile, tablet, and laptops. Maybe a single device will suffice, and it can start with mobile phones being largely powerful to carry out heavy multi-tasking.

Symetium Mobile full specs and reviews as of Feb 2023. Buy it here! 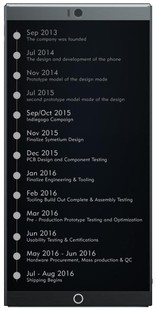