Japanese technology giant Sony has announced its new and what can be called a flagship mobile, Sony Xperia XZ Premium with an estimated price tag of Rs 55000. Also comes along with XZ Premium is Sony Xperia XZs, which is also announced at the Mobile World Congress 2017. Let’s go into the details…

The Sony Xperia XZ Premium packs the high-end Qualcomm MSM8998 Snapdragon 835 octa-core processor and runs on Android’s latest operating system v7.1 (Nougat). Built with Kyro architecture of 4x2.45 GHz and Adreno 540 GPU, the Xperia XZ Premium’s is the highest range of processor of all as of now.

Weighing around 190 grams, the Sony Xperia XZ Premium is designed with minimal side bezels and bigger top and bottom bezels. This is the first mobile phone to be released with a 4K display. With the 5.5-inch IPS LCD display, the screen resolution of XZ Premium is 3840x2160 pixels with the pixel density of 801 ppi and screen to body percentage of 69.4%.

The Sony Xperia XZ Premium comes with a 4GB RAM and a whopping 64GB internal memory, which can be expandable up to 256GB with a MicroSD card.

Bearing the responsibility of being the flagship mobile of Sony, the Xperia XZ Premium is a perfect choice for all its high-end features and high-toned sophisticated design. But if you are already ready to spend a hefty bundle, you can also look out for other mobiles like HTC 11, Apple iPhone 7, BlackBerry Porsche Design P9983 which stand at the same price range. 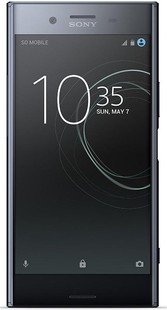 Rating:
None Out of 84 reviews