Sony has planned to launch the Sony Xperia XL in the market. Banking upon Android 4.0 Icecream Sandwich as its operating system, the smartphone features 12MP primary camera and an internal memory of 32GB. The 720 x 1280 pixels screen resolution unravels the rejuvenating opportunity for you to have a vivid display. The Sony Xperia XL is the new gun that Sony is looking to make a comeback with and they have made all the enhancements necessary to compete in this segment. Let's dive into the Sony Xperia XL specifications to know more about it.

- The presence of 32GB onboard storage ensures hassle-free storage of files, media, and documents.

- The selfie camera has been designed to be of 1.3MP only which may seem insufficient to many.

- The Android 4.0 Icecream Sandwich may make one feel dissatisfied as well as most of the phones come with an upgraded version of Android.

- There is no microSD slot that can be expanded further.

Embellishing itself with the Qualcomm MSM8260 Snapdragon along with a Dual-core processor that is able to perform at the frequency of 1.4GHz, the smartphone comes with the Android 4.1 Ice Cream Sandwich. With the Android Ice Cream Sandwich, the smartphone enables the user to customize the home screen as well as to have better data usage management along with bigram prediction and correction.
The Sony Xperia Xl has not been launched yet and we are unsure if the device would ever be. If, Sony does decide to launch this device, then updating the OS would be a strong suggestion if they are looking to survive in this highly competitive smartphone space.

Having a primary camera of 12MP that is able to arrest the moments filled with delight, the smartphone also comes with a 1.3MP selfie camera. Being able to record videos of 720p quality, the camera also comes with primary camera features like autofocus, LED flash, and geotagging. Ensuring the user to capture landscapes in a seamless and efficient manner, the primary camera has been designed to astonish the users with its capabilities.

The 4.3-inch display has a resolution output of 720 x 1280 pixels. The LCD display present in the Sony Xperia XL has a multi-touch display that has been designed to recognize the touch of more than one finger on the screen. Thus making movie watching and zooming in on pictures and videos effortless.

The incorporation of 32GB inbuilt memory allows the user to store plenty of data, media, and files as well. The 1GB RAM paves the path for one to run applications in a smooth and an efficient manner. The presence of a dedicated or a hybrid memory card slot is not known yet. However, given Sony Mobile's history in supporting expandable storage, the Sony Xperia Xl too might support expandable storage.

The Li-Ion battery present in the Sony Xperia XL has a capacity of 3000mAh.

The Sony Xperia XL also has features like accelerometer and proximity. The smartphone also comprises of features like 2G/3G/4G/direct WiFi/WiFi hotspot/v2.0 USB/ A-GPS connectivity. The presence of dual sim makes this phone ideal for the user looking forward to using two sims at a time.  The lightweight of the smartphone is certainly an advantage. It measures 55 x 33 x 1.4 inches. Even though the smartphone has considerable drawbacks like 1.3MP selfie camera, Android 4.0 Icecream Sandwich, and absence of microSD, the Sony Xperia XL comes with a myriad of benefits like 12MP primary camera and 32GB inbuilt storage.

Why should I wait for Sony Xperia XL release in India?

The Sony Xperia Xl is a phone that has not been launched yet. If experts had a say, stopping the launch of the Xperia Xl would be wise as the specifications of the phone are no longer futuristic and the phone seems outdated when compared to the current competition. With the Sony Xperia XL release date and Sony Xperia Xl price in India not out yet, users have an eye out for this masterpiece. For, it is definitely one that you’d want to use to gift to your dear ones.

Sony Xperia XL full specs and reviews as of Dec 2021. Buy it here! 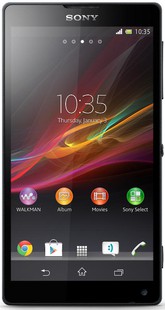