Designed to capture immersive viewing, the Sony Xperia XA1 is perhaps one of those smartphones that combine enhanced functionality, a powerful camera unit and portray the elegance through its design. Boasting of a 23MP + 16 MP camera unit, this smartphone works on the Android Nougat v7.0 operating system and has many features that will leave the user filled with amazement.

Having a screen resolution of 1080x1920 pixels, the smartphone features a 6-inch display that is of IPS LCD in the category. Having a pixel density of 367 ppi, the capacitive touch screen has been built to register any touch while coming in contact with a conductive object and has a screen to body ratio of 76.1%. The multi-touch display of the smartphone ensures greater efficiency and smoothness.

The pride of this smartphone is its camera unit. The 23MP primary camera coupled with the 16MP selfie camera allows the user to capture startling images. Being adept at capturing 2160p quality video @ 30 fps, this smartphone adorns itself with features like geo-tagging, touch focus, HDR, panorama, and face detection. The salient features of the primary camera are inclusive of phase detection, laser autofocus, and LED flash.

While a 4GB RAM has been incorporated in this phone for the sake of making the entire experience a hassle-free one for the user, the smartphone comes with 32GB inbuilt memory and can be expanded up to 256GB using a MicroSD.

The 2700mAh Li-ion battery offers talk time of up to 13 hours and a standby duration of up to 708 hours on 3G connectivity. However, the battery is non-removable.

The processor of the Sony Xperia XA1 Ultra has a Mediatek MT6757 Helio P20 chipset and a Cortex A53 architecture. The Octa-core processor of the smartphone has a Mali-T880MP2 GPU that can work at a frequency of 4x2.3 GHz. Designed to boot on the Android Nougat v7, this phone can provide the user with an opportunity toggle apps with a double tap and play graphically-enhanced 3D games too. Besides having features like accelerometer, gyro, proximity and compass, this smartphone enhances itself with connectivity options like 2G, 3G, 4G, v2.0 USB, and Wi-Fi 802.11.

While one might look at this smartphone with a bit of awe due to its 2700mAh battery and 32GB inbuilt memory, one must recognize that the ultimate strength of this phone is the camera unit and the dedicated microSD slot that can be expanded up to 256 GB. To conclude, this smartphone is worth an attempt due to its classy look and pro features. The Sony Xperia XA1 Ultra price in India is speculated to be around INR 27,000 upon launch. The phone is surely up against the Moto X play, OnePlus 3, and Vivo V5 Plus, which offer better specs in everything else but the camera. 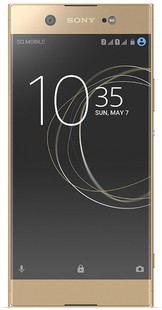