Xperia is a product line of Smartphones and tablets by Sony. Sony Mobile was founded in Tokyo, Japan in the year 2001 as a joint venture between Sony and Ericsson. On October 2011, Sony announced that it would acquire Ericson’s stake in Sony Ericsson. After this Sony Ericsson was known as Sony Xperia and all its products have been manufactured under the same venture. Below is the summary of Sony Xperia X performance specifications.

Sony Xperia X Performance is the second model that is being launched by Sony for its X-Series which is expected to hit the market very soon. The phone features include 5.0 inches screen with 1080 x 1920 pixels at 424 ppi, great performance with Quad-core 2.15 GHz Kryo & dual-core 1.6 GHz Kryo and comes with an inbuilt memory of 32 GB that can be expandable up to 256 GB. The phone has a rear camera of 23 MP and front camera of 13 Megapixels. It is also water resistant.

It does not have a great battery life for the price you pay. Plus the volume control is placed indifferently unlike other smartphones.

The phone has Qualcomm Snapdragon 820 processor at 2.15GHz ensuring it does not have any performance related issues. It can easily launch apps and do multitasking at the same time. It also has good graphics for gaming apps.

Sony Xperia X performance has a primary camera of 23 Megapixels while its secondary camera is 13 Megapixels which is excellent for daylight shots. It delivers good quality pictures without blur. The best part about the camera is the proprietary predictive hybrid autofocus which captures moving objects as well by predicting its motion. However the low light experience isn’t as good as Samsung Galaxy S7 but still it can take good pictures.

The ultimate Sony Xperia X Performance design looks very identical to Xperia X. The same rounded polycarbonate edges, similar metal back and buttons with multi touch display features. Sony Xperia X performance display size is 5.0 inches and has screen resolution of the phone is 1080*1920 pixels. The dimensions of the phone are 5.66 x 2.78 x 0.34 inches and weighs around 164 grams.

As per the Sony Xperia X performance reviews, it has an internal memory of 32 GB which is good enough to store your personal data. In addition to that, it has expandable memory option up to 256 GB by using a memory card. The phone has 3 GB RAM which is little less compared to other phones in the same price range.

Sony Xperia X performance battery capacity is 2700 mAh which is non-removable. Also, it has adaptive charging technology Qnovo which is designed to boost battery life.

The price of Sony Xperia X performance in India is 49,999 INR. Other phones in the same price range include Apple iPhone 5 , LG V20 and Samsung Galaxy S7 Active. You can check the entire specifications and compare to opt for the best phone. Sony Xperia X Performance seems overpriced with very few upgrades compared to its last model Sony Xperia X so we would not recommend this if you are already using Sony Xperia X. But if you are not, then go for it and buy it today! 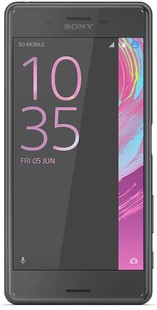