Facing a decline in demand for its smartphones, the Japanese giant Sony continued developing its flagship anyways. The company introduced its new range ‘X’ in 2016. The new flagship device the Xperia X Dual is not as special as the others with a more affordable price range but Sony has tried to makeup for it by improving its camera technology. The phone has a premium look and finish owing to the full metal body. It is 0.2 inches smaller than its predecessor the Xperia Z5 but the difference is hardly noticeable. The phone has a fingerprint scanner but honestly, it is not as efficient as on the others like the iPhone, Samsung J series or the OnePlus. The phone has a 5-inch full-HD LCD screen with a resolution of 441 ppi.

Coming to the processor, it is powered by a Qualcomm Snapdragon 650 along with 3GB RAM and 64GB (expandable up to 256 GB)  internal storage. To be honest this is not very impressive as the Xiaomi Redmi Note 3 uses the same processor for a much lesser price. The phone has a 2620 mAh battery which is so average looking at the price point.

The Sony Xperia X Dual has a 23-MegaPixel primary camera and a 13-MegaPixel front camera, both come with Sony's  Exmor RS sensors. The rear camera has a LED flash and both of them shoot full HD resolution videos. But the noticeable flaw is the absence of 4K video that is provided by One Plus for the same price.

To conclude, The Sony Xperia X Dual, priced at INR 24,990, is a disappointment due to the lack of a majority of features provided by other smartphones belonging to the same price range. The only reason to go for it is the camera quality. 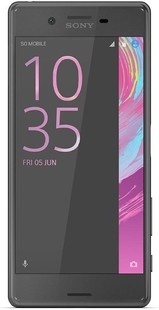