The device has internal storage of 4GB that is expandable up to 32GB on a microSD card. The RAM is 512MB, provided for processing data at a faster pace. It also has a Dual-core processor with a  processing speed of 1.2 GHz. The device works on Android (JellyBean v4.2.2) operating system. The Sansui SA53G has a battery capacity of 1700mAh. It comes with a primary camera of 5 MegaPixel and a secondary camera of 0.3 MegaPixels. The device supports dual-SIM, Bluetooth, micro USB, 3G connections, and GPS.

As far as the design is concerned, the phone comes with a touchscreen display of 5 inches. The phone has a QHD display with 540 x 960 pixels screen resolution. It has a sleek body with only 10.5mm thickness. In addition, the device has proximity and gravity sensors.

The Sansui SA53G is like any other average smartphone. The device stands behind when it comes to its camera, processor and display performance. Within the price range, you can search for better phones. 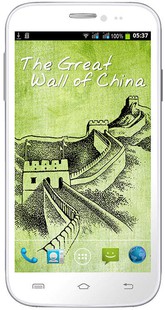 Rating:
None Out of 4 reviews