In order to empower the budget smartphones users with a smarter option to go with, Samsung has come forward with the Samsung Z4. Expected to be priced around INR 4500, this smartphone will feature Tizen 3.0 and a camera unit of 5+5MP. The inclusion of features like 128GB expandable microSD slot along with the sleek design of the smartphone will certainly make the users astonished.

- It features 8GB internal memory and runs with the help of  1GB RAM.

- The microSD slot present in this smartphone can be expanded up to 128GB.

- The primary camera is adept at capturing 720p videos at 30 frames per second.

- Does not feature Android OS

The Quad-core processor included in this Samsung Z4 is able to work at the frequency of 1.5GHz. The Tizen 3.0 is recognized for offering a faster startup when compared to few variants of Android. Rendering a better performance for web browsing, the Operating system ensures support necessary for playing games that require advanced level 3D graphics. Multi-tasking and multi-touch gestures are supported as well. So with all that said, there is no room for thinking that the Tizen 3.0 is anything less than the Android.

The amalgamation of camera allows one to capture the moments that one would cherish for the rest of his or her life. The capacity of the primary camera to record 720p video at 30 frames per second is an added advantage. The LED flash has been designed to help one during the low light conditions. Other features that have been incorporated in the camera of the Samsung Z4 are inclusive of geo-tagging, face detection, panorama, and HDR.

Having a screen resolution of 480 x 800 pixels, the smartphone comes with a display that is perfect for watching videos or playing games. The capacitive touch screen accompanied by a TFT display ensures the registration of a touch as it comes in close contact with human body. The multi-touch display has been intended to register touch of more than one finger. Besides having a pixel density of 207 ppi, it also features 62.7 to body percentage.

Apart from having an memory of 8GB, the Samsung Z4 comes with microSD that is expandable up to 128GB which ensures storage of data, files and media. The smartphone runs on a 1GB RAM that guarantees operation free from .

The Li-Ion battery included in this phone has a capacity of 2050mAh. However, it is not removable.

Despite having Tizen 3.0 as its operating system and a low capacity battery, the Samsung Z4 might appeal to the section that is always in search of budget smartphones. The inclusion of features like microSD expandable up to 128GB, 1GB Ram, dual sim, 2G/3G/4G/ WiFi/ GPS connectivity, so on and so forth certainly make it worth a try. 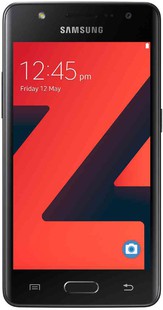