Samsung is a Korean company which is popular across the world. Along with mobiles, it provides lithium-ion batteries, semiconductors, chips, flash memory, hard drives, and other  electronic devices. Samsung Z1 is the first mobile from Samsung which comes with its own software. Samsung Galaxy On Nxt and Samsung Galaxy J Max are few best releases from the Samsung family.

Camera:Samsung Z1 features a 3.15MP primary camera unit with an LED flash. The camera has Geo-tagging and  face detection. It has a VGA secondary camera. We can record 480p videos at 15fps. Samsung Z1 camera specification is not up to the mark. Many others provide 5+2MP camera unit at the same price margin.

Samsung Z1 mobile allots two sim slots. It has a 4.0 inch PLS TFT capacitive touchscreen, with a screen resolution of 480 x 800 pixels. The pixel density of the mobile is 233 ppi. The screen to body ratio of the mobile is 59.8%.Samsung Z1 design resembles Samsung Galaxy series mobiles. It has curved edges and thickness of 9.7mm. It measures 4.74 x 2.49 x 0.38 inches and weighs 112 grams.

Samsung Z1’s battery capacity is 1500mAh. The talk time of the mobile is up to 8Hrs. It has additional features like Dropbox (50 GB cloud storage), MP4/H.264 player, MP3/WAV/AAC/Flac player, Photo viewer and Document viewer.It is available in White, Black, and Wine Red colours.

Samsung Z1 is the first phone from the Samsung family,  which runs on its custom built software. Samsung Z1 price in India is around INR 4500. Apart from software, the specifications of this mobile when compared to other android devices are low.

For example Alcatel One Touch Flash mini 4031D provides better camera specifications that is 13+5MP,  whereas Asus Zenfone 4 offer more storage space than Samsung Z1. If you want to  switch from a feature phone to a smartphone at a less price then this is a good option for you. 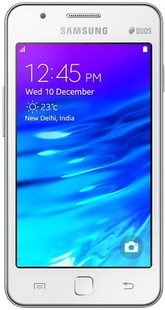