The Samsung Galaxy Pocket Neo features include an internal memory of 4GB that is expandable up to 32GB on a microSD card. The phone comes with 512MB of RAM and a single core processor of 850 MHz frequency. The operating system that runs the show is an Android JellyBean v4.1 unit.  The phone supports dual SIM, 3G connectivity, and is micro SIM compatible. Other than that, it has Bluetooth v4.0, microUSB v2.0, Wi-Fi 802.11, b/g/n, and GPS.  The battery capacity is 1200 mAh. The main camera of Pocket Neo is 2 MegaPixel that can record videos of 320x240 pixels resolution at 15 fps speed. It also has a Digital Zoom feature. The phone does not have a secondary camera.

Speaking of the design, Samsung Galaxy Pocket Neo has a3.5-inch LCD display with a capacitive touchscreen. The body of the phone is simple and plain. It has a home button on the bottom front and an unlock/standby button on the right side. Along with the small size, it weighs only 100 grams.

If you are fond of small size phone and the Samsung Galaxy series, you can definitely the buy Samsung Galaxy Pocket Neo. But as the technology of smartphones has advanced over time, you can find other smartphones with recently updated and better features within a similar price range. 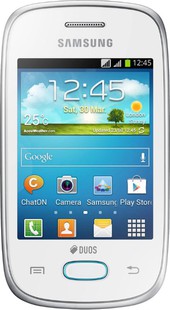