Samsung surely has never failed to marvel its users with their range of smartphones and so, for the longest time, Samsung is ruling the smartphone market. Many phones that were recently launched by Samsung come with superior features and best utilities. The Samsung Galaxy On Nxt is one of them. The phone was launched in April 2017 and belongs to a low price range of phone. You can buy a Samsung Galaxy On Nxt 64GB at price INR. 11,999.

The feature that makes the Samsung Galaxy On Nxt so special is its metal unibody. The device is stronger with this. Adding to it, the device has a 2.5D Gorilla screen that protects from physical damage to the phone. The device comes with a fingerprint scanner placed on the home button which proves to be of great use. Another value-added feature is that you get a powerful battery that gives you a talk time of 21 hours on 3G.

Coming to the rest of the specifications of Samsung Galaxy On Next, you get an Octa-core processor in this phone that runs at the speed of 1.6GHz frequency. With this processor, you get 3GB RAM for an enhanced performance. As mentioned above, the phone battery is powerful with 3300mAh capacity. The storage of the device has an internal memory of 64GB and it can be extended up to 256GB on a microSD card. So much of storage capacity gives you the advantage of carrying around as many apps, multimedia files including movies and more. The dual-SIM device is compatible with Nano-SIM cards and it supports 4G VoLTE network. The phone supports USB 2.0 and it has an additional connectivity feature, the Smart Switch (PC version) with which you can connect to your personal computer easily to synchronize your data.

When it comes to the camera, it is one of the remarkable factors of the phone. The main camera is 13 Megapixel while the front is an 8 Megapixel unit. The camera is designed to click remarkable pictures and it has a f/1.9 aperture that would give your pictures a very good depth of field. The phone screen is a 5.5-inch LCD display. The display features 16M color depth and it can display videos of 1920 x 1080 pixel resolution at 60 fps. With this you can figure out the motions on this display are very smooth and comfortable to your eye. You get an additional feature on this phone of fingerprint scanning placed at the home button.

Overall, the Samsung Galaxy On Nxt is a gem and probably one of the best phones you can get in the mentioned price range. The device is a must buy for its battery, storage, and camera. However, the device could have done better with its processor and availed Android Nougat rather than Marshmallow to beat other competing mobiles in the market.

Samsung Galaxy On Nxt 64GB full specs and reviews as of Aug 2022. Buy it here! 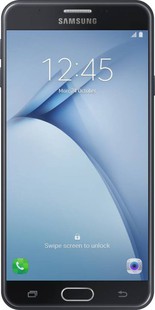