Samsung enjoys a respectable position in the smartphones.If you examine all the features of the phone at a glance offered by it, you will find out that the price charged by it is truly justified. The phones have some really rich features offered by it.

The Samsung Galaxy J7 2016 gives some hot features with regards to storage, camera and display. It houses 16 GB on-board storage with an expandable card slot, a dual camera with 13 MP rear and 5MP front shooter, and an alluring display of 5.5 inches.

The Samsung Galaxy J7 2016 price in India is 14900 INR which is above the low budget phones. So compare it with other phones before making a buying decision.

The Samsung Galaxy J7 2016 is backed by a Qualcomm MSM8939 Snapdragon 615 Exynos 7580 Octa 8 (Octa Core) processor built on Cortex A53 architecture. The frequency offered by the phone is 1.4 GHz. It functions on the Android Lollipop v5.1.1 platform upgradable to v6.0 Marshmallow. It also contains an Adreno 405 Mali T720 MP2 GPU.

The Samsung Galaxy J7 2016 camera quality is quite impressive. It gives a primary camera of 13-megapixel primary camera and a front facing camera of 5 megapixel which is good for selfie lovers. Video recording of 1080p @30 fps is available with the phone. This phone also has some features like autofocus, face detection, touch focus, panorama, and HDR.

The Samsung Galaxy J7 2016 contains either a single SIM slot or dual SIM slot with dual standby. The dimensions and weight measures of the phone are 5.99x3.1x.30 inches and 171 grams respectively. It runs on the network type of GSM/HSPA/LTE.

The Samsung Galaxy J7 2016 comes with 5 inches super AMOLED capacitive touchscreens with a screen resolution of 720 x 1280 pixels. The phone has a pixel density of 267 PPI.It also has multi-touch display features available with it. The screen to body ratio is 69.9%.

The Samsung Galaxy J7 2016 comes with an internal memory of 16GB besides a 2GB RAM. It also contains an expandable card slot of micro SD of 128GB.

The Samsung Galaxy J7 2016 battery is 3000 mAh which means a talk time of 18 hours in 3G. The battery of this phone is of Li-Ion type and can be removed. The standby time could vary accordingly.

The phone also offers certain common features which are Bluetooth (v4.1), micro USB (v4.1), NFC, and WiFi (802.11b/g/n), Wi-Fi direct, hotspot, GPS (A-GPS, GLONASS/BDS) and FM radio.  Sensors like accelerometer and proximity are inserted in it. A 3.55 mm jack for headphones and an alert for all types are also supported by the phone.

Why go for Samsung Galaxy J7 2016?  All the features you expect within the range are present in this phone. Before grabbing one, compare it with other phones offered by Xiaomi. 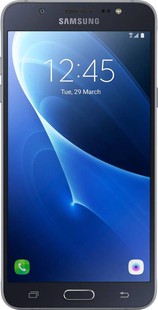