Samsung Mobile India has been running several campaigns promoting their entry and mid-range segment smartphone. Over the course of last three years, the company has lost most of its market in India. Due to aggressive competition in the market, the company is reportedly coming up with a new Galaxy smartphone. It would be called Samsung Galaxy J4. Let’s talk about the Samsung Galaxy J4 specifications and price in India.

No design improvements, No fast charging.

Considering the industry trends, the Galaxy J4 doesn’t look attractive and isn’t what you’d call an eye-candy at all. But of course, if you’re looking to invest in a Samsung mobile under 10000, you cannot expect more from Samsung in terms of design. They usually tend to have slow pace when it comes to entry-level segment. Talking about the display, it would be of 5-inches sporting a 720-pixel resolution.

The South Korean giant likely to introduce an Exynos Quad-core processor, which will clock at 1.4 GHz. Samsung is known to optimize the performance of its handsets. Now with its in-house chipset equipped in the new Galaxy, rest assured, the company would optimize for best-in-class performance. Supported by a 2GB RAM and 16GB internal storage, which could be expanded via microSD card slot.

Not quite interesting, but trying to keep up with industry trend has always been struggling for the brand in this segment. With a 13MP rear camera and 5MP front camera, the camera department isn’t quite impressive. But it should be enough to offer a decent camera experience if you’re not into detailed photography.

With 2800 mAh capacity battery, the company claims to offer a day’s battery life. Which should be enough to power the small screen and optimized processor.

Overall, we felt that this device has enough to keep your day-to-day tasks work seamlessly. Also, occasional gaming and multitasking shouldn’t harm the processor on this device. But what you truly have to decide is whether you’re ready to spend around Rs 9,000 on a phone when there are phones like Xiaomi Redmi Note 5 available with all-round specifications.

Samsung Galaxy J4 full specs and reviews as of Dec 2022. Buy it here! 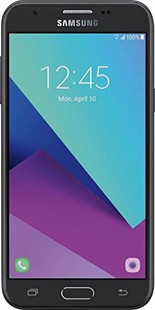