Samsung mobiles introduced the Samsung Galaxy J2 to cater to those sects of smartphone users who prefer having a smartphone which costs them less than 10,000 rupees. The Samsung galaxy J2 is budget phone which competes with Coolpad Note 3, Mi 3 in this segment.

The Samsung Galaxy J2 2016 comes with an Android Marshmallow Operating system with a Spreadtrum SC8830 chipset and a Quad-core 1.5 GHz Cortex-A7 processor. This is powered by a 1.5 GB RAM unit to process multitasking requests with the least lag. The graphics on this budget phone are powered by Mali-400MP2 GPU.

The Samsung Galaxy J2 2016 camera review of the 8+5MP unit on this device has been reviewed positively. The primary camera manages to click good quality images during the day and the LED flash helps capture good images even in low lighted conditions. It features Geo-tagging, touch focus, face detection, HDR, and panorama. The selfie shooter on this is a 5MP unit which does a decent job with f/2.2 aperture.

The Samsung Galaxy J2 2016 comes with a 5 inch SUPER AMOLED screen which produces a display resolution of 720 x 1280 pixels with a pixel resolution of 294 pixels per inch. The screen to body ration on this display unit is 68%

The Samsung Galaxy J2 2016 features 8GB internal memory. Though the internal memory on this is low, it has an option to use expandable memory up to 128GB.

The Samsung Galaxy J2 2016’s battery backup is powered by a Removable Li-Ion 2600 mAh battery that provides a music playback time of up to 54 hours and talktime of up to 14 hours on 3G connectivity.

The Samsung Galaxy J2 2016 price in India is priced under 10,000 rupees. The competition in this segment is fierce and it competes with Coolpad Note 5, and Redmi 3. The competitors provide much better specs and features including fingerprint scanner and more at this price 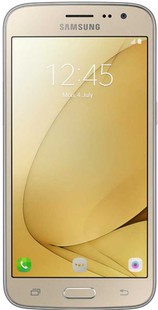