Samsung C7 mobile boasts its 5.2-inch Super AMOLED full HD screen with 424 ppi that enables excellent sharp and clear display. It is slim and weighs 165 grams.  Samsung C7 is available in 2 colors-Pink and Gold variants. There is a fingerprint sensor, which is agile and unlocks within 0.1 seconds.

Unlike Samsung e5, the new samsung c7 packs with 16MP rear shooter that features LED flash. At the front, it gets 8MP selfie shooter which is decent even in low lights. There is an ample space of 32GB in the mobile and it can be expanded up to 128GB via microSD slot.

This mobile is powered by 3300mAh non-removable battery that promises to work for whole day on 3G network. There are many connectivity options in the mobile like 4G, wifi, bluetooth, NFC, GPS and USB 2.0. For all the features it has got, Samsung C7 mobile price is reasonable and is expected to be around INR 28,990. On a whole, it is an excellent mobile both in performance and design and is worth every penny.

Samsung Galaxy C7 is slim and accompanied with powerful specifications. It is equipped with brilliant cameras and also comes with radiant display.

The non-removable battery is a turn down. The dual hybrid sim slot too is a negative with the mobile.

Samsung C7 is priced in upper mid-range and is packed with many state-of-the-art features and delivers a power-packed performance.

Samsung is working on its middle budget range mobile phone that packs with many interesting interests. From slim design to robust hardware, this mobile has everything that a smartphone requires. Similar to Samsung Galaxy C5, the new variant gets a refreshing look and feel. Let’s go for a detailed insight of this capable smartphone.

Samsung Galaxy C7 display is sharp and gets a 5.2-inch Super AMOLED screen with Full HD resolution retaining 386 ppi pixel density. The mobile features 73.92% screen to body ratio and is easy to hold. Single handed operations are not onerous with this new C7 samsung mobile.

Encased in sturdy metal body, the phone boasts its snazzy looks in pink gold. It’s slim and weighs around 165 grams. From the front the mobile resembles iPhone while the large camera mount and antenna lines are influenced by HTC one M9 plus. However, the phone is attractive in its own way.

On the photography front, the phone is equipped with 13MP primary shooter that has dual LED flash to aid low-light photography. At front it gets an 8MP snapper that captures clear selfies. Both the cameras get a super wide aperture lens that improves photography experience. The mobile houses 32GB inbuilt memory with an expandable storage option up to 128GB via memory card.

Like all C-series mobiles, the new C7 too is fuelled by 2600mAh non-removable battery. The device works for longer hours in a single charge and brags turbo-charging feature. In the price range it stands in, the Samsung Galaxy C7 seems under powered in terms of battery specifications as the OnePlus 3, 3T, and the Moto Z2 Play offer nothing less than 3000 mAh. This is a con you should keep in mind if you are considering to purchase the Samsung Galaxy C7.

The device is almost a premium smartphone with slight downs here and there. Attractive design and powerful performance keeps the mobile in race with other premium brands like Google and OnePlus. Samsung galaxy C7 price in India is expected to be around INR 28,990 and might be available in India in a couple of months.

Samsung Galaxy C7 full specs and reviews as of Dec 2022. Buy it here! 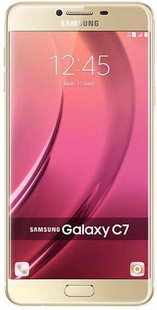