The internal memory provided is 32GB and can be expanded to a maximum of 32GB.

The Panasonic Eluga Note runs on the latest Android version 6.0 - Marshmallow. The phone is equipped with an Octa-core 1.3Ghz CPU, Cortex A53 64-bit Processor, and 3GB RAM. Viewing pictures in your gallery or gaming on the go wouldn’t be a problem with specs like these.

The Panasonic Eluga Note 4G houses a 16MP primary camera with a triple flash. With a focal length of 1.9 and Autofocus built in, taking pictures in low light conditions should be a cakewalk for this device. The secondary camera is a 5MP one. The camera of the Eluga Note 4G is equipped to take videos at 1920 x 1080p. Features like Smile Shot, Gesture Shot, Voice Capture are built in.

The Curved edges and the 5.5 Inch Full HD screen definitely add finesse to the Panasonic Eluga Note. The Display screen supports the 16M colour code and is a LTPS IPS LCD screen. It produces a display output of  1080x1920 pixels with 401 PPI pixel density. Watching movies or playing games on this should be a splendid experience.

The Panasonic Eluga Note price falls in the right bracket, the bracket that attracts most of the smartphone buyers. The high-speed RAM, ultra-fast processors and high-resolution camera, and larger battery add value to the phone. However, the only downside to this is that the expandable memory is limited to 32 GB. So, you would frequently have to transfer data to your personal computers or external hard drives. The Panasonic Eluga Note competes with Redmi Note3 32GB and  Lenovo K6 Note.

Panasonic Eluga Note full specs and reviews as of Dec 2022. Buy it here! 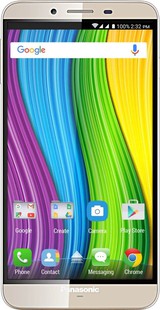