The Japanese giant Panasonic has introduced a latest battery-centric Android phone called the Eluga A4 in the Indian market. This is available at a competitive purchase price of INR 12,490. The key highlight of the device is its mammoth 5000 mAh battery capacity. Similar to all latest Panasonic devices, the Eluga A40 as well complements the firm's proprietary virtual assistant: Arbo. The Eluga A4 is sold in three colour variants: Marine Blue, Champagne Gold, and Mocha Gold.

The Panasonic Eluga A4 is powered by a Quad-core processor clocked at 1.25GHz   seated on a MediaTek MT6737 processor. This is coupled with 3GB RAM  to ensure an efficient performance. 3GB RAM must be adequate for multitasking and heavy duty applications.However, given the MediaTek processor, mundane activities like scrolling through call logs and navigation through menus will be a bit of a burden. The Panasonic Eluga A4 runs on Android Nougat 7.0 operating system out of the box.

The shooters on the handset have been toned down to maintain the price of the handset. Hence the quality of images shot by the device is not up to the mark.

The primary shooter is 13MP featuring LED flash and the front-facing camera is 5-MegaPixels, which is just good enough for a decent self-portrait.

The Panasonic Eluga A4 sports a 5.2-inch IPS LCD Capacitive Capacitive panel and display resolution is 720x1080 pixels, which falls in line with most handsets in the price band. The dimensions of the device are  149.50 x 74.00 x 8.95 mm (height x width x thickness) and weight is 162.00 gm.The Panasonic Eluga A4 packs in an all-metal frame along with a 2.5D curved glass on the front and a fingerprint scanner mounted on the rear. The fingerprint scanner can as well be utilised to scroll through gallery, applications, Web Pages, and snap selfies.

The device comes with 32GB of native storage is upgradeable up to 128GB using a MicroSD expansion slot. Storage space will never be an issue and you can comfortably store media files, apps, and other data.

The highpoint of the handset is its 5000mAh Li-ion unit that drives it, and on a single charge it can easily last two days. In addition to this, the Panasonic Eluga A4 as well enables quick charging.

Panasonic Eluga A4 full specs and reviews as of Dec 2022. Buy it here! 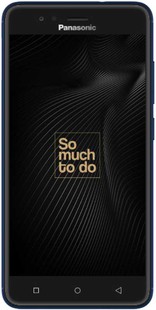