Similar to the Oppo A75, the A75s also comes with a display aspect ratio of 18:9. The Oppo A75s handset differs from the original Oppo A75 only in the storage department. As well, like the Oppo F5 that was rolled out earlier, the Oppo A75s features the facial recognition functionality. The price of the Oppo A75s in India starts at INR 25,990 and is due to be released in February 2018. The Oppo A75s is sold in multiple colour variants such as Black and Champagne.

In terms of hardware, this latest Oppo device is driven by a MediaTek Helio P23 processor which is clocking 2.5 GHz. This is supported by 4GB RAM to multitask with ease. The handset is as well suitable for gaming. On the software ground, the A75s sails on Android 7.1 Nougat out of the box with the ColorOS 3.2 on the top.

Oppo handsets have been awesome imaging gadgets in the past, and the A75s also falls in line with that trend. One can expect good quality pictures even in the most demanding circumstances courtesy the 16 Megapixel back camera which is supported by an LED flash. At the front, the handset ships with a 20 Megapixel front snapper for video telephony and self-portraits.

On its face, resides a 6-inch Full HD+TFT display. This comes with a display aspect ratio of 18: 9 which is apt for people who love to watch videos or indulge in graphic-intensive games. The screen on the smartphone as well features a covering of Corning's Gorilla Glass to avoid impacts and scratches. Also, the smartphone provides decent quality outdoor legibility. This is a bonus as the display on most gadgets seems to fade away when placed under bright sunlight. The A75s comes with a metal chassis along with a fingerprint scanner at the rear which you can use to store multiple fingerprints to unlock the handset.

In terms of storage, the Oppo A75s comes with a default storage space of 64GB.This is twice than what you would get in Oppo A75. The internal memory is upgradable up to 256GB using a microSD card.

As far as power goes, the handset is supported by a Li-Po 3,200mAh unit which is non-removable. This is good enough for longer durability than most other handsets in the similar price band.

The Oppo A75S is another sturdy device from Oppo and is packed with quality features. The gadget offers a perfect performance even when multitasking and running graphics intensive games – thanks to the amazing configuration. The cameras, as usual, are superb in terms of quality. It is armed with large storage. Besides, the design of the device is gorgeous which makes the handset more attractive. But, a better battery capacity would have really made it a nice choice to go for. 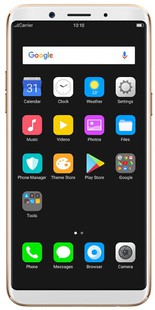