Oppo is a Chinese company which came into being in the year 2004. It has recently entered the Indian market and has been making its presence felt since then. It has launched many products since then be it budget phones or high-end phones. It has recently launched the Oppo A33 phone.

This phone is stacked with some decent features to compliment it. Oppo A33 has provided a good primary and secondary camera. The storage provided too is doable and would be feasible to people. It has been provided with all the sensors that you can normally expect from a phone in this age.

One of the major Oppo A33 drawback is that it is coming out with the Android version 5.1 that is Lollipop. This is quite disappointing since most of the Chinese budget phones are being released with the Marshmallow version at the least.  Also considering the expected Oppo A33 price in India the battery does not seem to do justice to it.

The Oppo A33 display is rumored to be at 5.0 inches which is comfortable enough for a smartphone. Other Oppo A33 specifications that you can expect are IPS LCD with a capacitive touchscreen, resolution at 540x960 pixels with a pixel density of ~220 ppi and the screen to body percentage which is 67.4% . Looking at these Oppo A33 specs, it doesn’t sound like a good bet.

The Oppo A33 camera features are decent enough with an 8mp rear and a 5mp front camera. The camera quality seems to be good enough but not for the price it is being charged since there are many other mobiles which provide a better camera for a less cost. Some of the other Oppo A33 camera features that are included are Geo-tagging, Touch focus, Face detection, HDR, and Panorama. All of these features are available in almost every smartphone nowadays.

As mentioned previously, the Oppo A33 battery power is fairly on the lower side. This phone is powered with a 2400mAh battery which will mostly last for half a day and you will need to charge it again. The Oppo A33 battery life is another drawback.

This new Oppo A33 smartphone runs on 1.2GHz quad-core Qualcomm Snapdragon 410 along with a 2GB RAM. It is a dual SIM phone which supports Micro SIM in one and Nano SIM in the other slot. Connectivity options are Wi-Fi, GPS, Bluetooth, USB OTG, FM, 3G and 4G.

There is nothing remarkable about the phone except price in India which is around 13,990 INR. But when compared to the other phones of the same price range being released by Meizu, Gionee, and the likes, it might find it difficult to attract buyers. 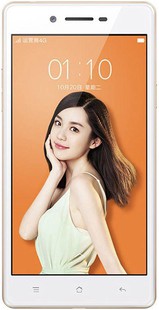