Nokia, the Finnish manufacturer has a lot going on this year. With the refreshed lineup on its way to India, there is another resurrection that company have confirmed to be planning is the Nokia X series. The first Android smartphone from the brand was Nokia X. The company is planning to introduce a Nokia X6, a successor in the X Series. Let’s talk about the Nokia X6 specifications and whether it would be worth waiting or not.

The Finnish mobile maker is fondly known for its design principles and the new Nokia X6 surely screams that with its brilliant implementation of the iPhone X- like a notch. Sporting almost a bezel-less look, the upcoming Nokia Android smartphone would be coming with familiar design as seen on Nokia 7 Plus. At least the rear setup reminisces about it.

Following the trend, Nokia X6 would be coming with an 18:9 aspect ratio screen. Thus, offering an immersive experience that one mostly demands on their smartphone. This 5.8-inch large screen would be sporting a 2280 x 1080 pixel resolution with a pixel density of 435 ppi. Unfortunately, it won’t be a Super AMOLED display.

Powering the mind on this device would be a Qualcomm Snapdragon 636 for the 6GB RAM variant, whereas the 4GB RAM model would be equipped with an Helio P60 processor. The internal storage is expected to be at 64GB and 128GB for the respective models. Running on the latest Android 8.0 Oreo stock UI, the company claims to offer best in class user experience.

Nokia is a brand quite popular for its camera-centric smartphone and this won’t be any different. Supposed to come with a dual rear camera setup in partnership with Carl Zeiss optics, it would be coming with a dual 12 MP lens setup. Further details are scarce, but we expect it to come with brilliant lenses. The selfie camera might come with a 5MP resolution, which should be enough for great selfie experience.

Equipped with a 3500 mAh capacity battery, the device might offer a day’s battery life. There might be a support of a fast charging since both of the processor support fast charging technology.

Nokia is trying to resurrect another smartphone that was long dead. While it might not have been a good idea for any other incumbent player, the Nokia has strong loyal customers that like them for what they were and what they’re now. Even if you’re not a Nokia fan, it doesn’t matter, because Nokia X6 might be one of the best smartphones under 20000 when introduced in India. 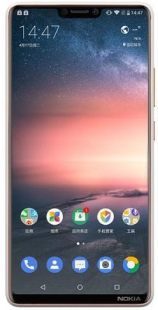