You know the good old times are back when all your favorite childhood things like Nokia and Nintendo are back with their new products. And the latest artifact of the nostalgia is Nokia 6, which was announced at the recent Mobile World Congress 2017. The Finnish mobile maker Nokia joined hands with another Finnish company HMD Global to bring back the pioneers of the last decade. The company announced at the MWC2017 that it is releasing Nokia 3, 5, 6 and the good-old Nokia 3310 soon. The Nokia 6 release date in India is yet to be confirmed.

The Nokia 6 comes with the Qualcomm Snapdragon 430 MSM8937 octa-core processor with 1.4GHz frequency and Cortex A53 64-bit architecture. The phone runs on the latest version of Android i.e., v7.1 (Nougat).

Nokia 6 comes with an 8MP front and a 16MP rear camera, with 2.0F aperture, Dual color LED and image resolution of 4616x3464. The camera features include exposure compensation, ISO control, Continuous Shooting, HDR, auto flash, Face detection, and touch to focus. The video recording ability can go up to 1920x1080 at 30fps.

The Nokia 6’s battery is a non-removable, Li-Polymer battery with the capacity of 3000 mAh.

The Aluminium-built Nokia 6 comes in five colors, which are Arte Black (limited edition), Tempered Blue, Silver, Matte Black, and Copper. The Nokia 6 comes with a 5.5-inch IPS LCD display is with Corning Gorilla glass and the screen resolution of 1080x1920p. The pixel density of the capacitative multitouch screen is 401 ppi and the screen to body percentage is 71.27%.

The Nokia 6 comes with a 3GB RAM and 32GB internal memory which is expandable up to 128GB with a MicroSD card.

The additional features of Nokia 6 include a light sensor, Proximity sensor, Accelerometer, Compass, and Gyroscope. Reportedly, the Nokia 6 price in India is Rs 16999.

Looking at the Nokia 6 price in India, we believe it is inarguably the best option one can have. Yes, there are other choices like Meizu M3 Max, Lenovo P2. But, when it comes to the brand value and the nostalgia, nothing can beat Nokia 6.  Nokia 6 is now available for sale from all the major e-retailers including Amazon, Flipkart, and Snapdeal. 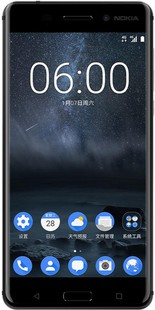