Delivering renewed commitment to its customers, Motorola comes forward to launch the Motorola Moto Z2 Force that is the ultimate amalgamation of breath-taking features. Adorning itself with the 13MP+8MP camera, the smartphone boots on the Android Nougat v7.0. Other features include 64GB in-built memory, microSD expandable up to 128GB, 4GB RAM, so on and so forth. The shater Shield technology incorporated in this phone has been designed to astonish the users as it will protect the screen of the phone when dropped. The Motorola Moto Z2 price in India is expected to be INR 39,999. The release date of the Moto Z2 Force is not out yet.

- It features 64GB internal memory along with the microSD expandable up to 128GB.

- The smartphone boots on the Android Nougat version 7.0.

- Battery capacity of the Motorola Moto Z2 Force is only 3500 mAh which is comparatively lower than any other phones of this price range.

Functioning in compliance with the Snapdragon 835 chipset, the Motorola Moto Z2 comes with an Octa-core processor that has the ability to run at the frequency of 1.8GHz. While the inclusion of 4GB RAM ensures smooth functioning, it also comes with the Android Nougat v7.0. The existence of the Android Nougat makes it a cakewalk for the user to accomplish the maximum with the multi-window video and quick switch analysis. It also paves a path for the user to experience high quality virtual reality by enabling the to play games that are graphically enhanced.

The 13MP + 13MP camera unit has been intended to leave one astonished when the time comes to arrest the sylvan beauty of the nature or capture precious moments with families and friends. Addition of the 8Mp selfie camera is undoubtedly an added advantage. Being able to record 1080p quality videos at 30 frames per second, the Motorola Moto Z2 Force is certainly worth the price. Other features that have been included in this smartphone are geo tagging and dual LED flash.

The 5.5 inch display screen of this smartphone has a resolution of 1080 x 1920 pixels that is sufficient for playing games or watching movies in a hassle free manner. The AMOLED display has been intended to carry a capacitive touch screen with it. The capacitive screen is known for its ability to register any human touch in compliance with its electronic display. THe multi-touch display has a pixel density of 401ppi.

While internal memory of 64GB is self-sufficient to store good amount of data and media, the addition of a microSD card that is expandable up to 128GB caters to the need of keeping more media files as necessary.

The 3500mAh battery is relatively lower than any other phones in this price range.

Besides having 2G/3G/4G/WiFi/Bluetooth v 5.0/ USB type C connectivity, this dual sim phone will certainly become the first choice for those who look forward to purchasing a premium quality smartphone. What makes this smartphone stand apart from the crowd are the features like proximity, accelerometer, gyroscope, ambient light, Android Nougat v7, 64GB inbuilt memory, microSD expandable up to 128GB. However, the low battery capacity of 3500mAh may make one think twice.

The Moto Z2 force in India definitely looks like a gun that is built to last. That said, with the price tag it comes with is heavy and at this price mobiles like the OnePlus 3T, Huawei P9 and Samsung Galaxy S7 provide better value for money in terms of specifications. 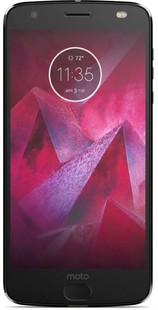