The Moto G4 Plus is the latest addition to the ever-growing product line up of Motorola. This handset is a slightly improvised version of the Moto G4. The handset has a superior build quality and the texture on the rear of the handset provides it with a grippy feel. The price of the device in India begins from INR 10,900. The smartphone is sold in two colour choices: White and Black.

The phone is equipped with a Cortex A53 Octa-core processor clocked at 1.5 GHz, a 2GB RAM,  and an Adreno 405 Graphics engine. These things are stacked on a Qualcomm MSM8952 Snapdragon 617 chipset developed on 64-bit architecture. The Moto G4 Plus sails on Android v6.0 (Marshmallow), the recent version of Android Operating system at the time of its launch. The device comes with a bloat free and quick stock Android UI.

This latest Moto phone ships with a 16MP primary camera and is accompanied by Autofocus and dual LED flash. Other camera options include Touch focus, Face detection, Panorama and Auto-HDR. It is supported with a hybrid autofocus technology - a combination of laser autofocus and phase detection autofocus. This technology aids in focusing quicker on the subject. The camera as well flaunts professional mode that enables consumers to explore manual controls such as  ISO, Metering mode, and manual focus. Besides, to capture photos in low-light the dual-tone LED flash option can be used. The picture quality is perceived to be the nicest in the Android phones of its price band. The Android phone is as well armed with a 5MP front-facing camera for selfie lovers and also supports in video telephony.

The Moto G4 Plus comes with a 5.5-inch large display and uses IPS LCD technology. It features Full HD resolution and generates a pixel density of 401 PPI. The Corning Gorilla Glass in the device protects the screen from cracks and scratches. On the front, the fingerprint ID is placed below the screen while the LED flash and laser autofocus are present on the rear, along with batwing shaped company's 'M' logo.The display has the capability to reproduce vibrant and crisp pictures. The Moto G4 Plus screen is also paired with amazing viewing angles. Mobile users can hope to entertain themselves with an awesome visual experience while watching videos or playing games on the large screen.

This Motorola phone presents 32GB space for default storage which can be extended with the via a microSD card up to 128GB.

The device is juiced by a non-removable 3000 mAh Li-ion unit which guarantees a full day battery backup. Besides, the device has Turbo Charging support which refills battery a lot faster than the regular charging. TurboPower charging option provides 6 hours of power in just 15 minutes.

Motorola Moto G4 Plus full specs and reviews as of Nov 2022. Buy it here! 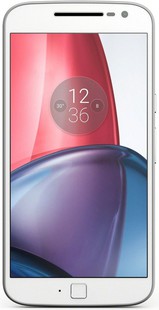