Motorola Moto G Turbo comes with 13 MP primary camera, which features Geo-tagging, touch focus, face detection, panorama, and auto-HDR. This also has a dual flash LED. It has a capacity of recording a video at [email protected]

It is equipped with an internal storage of 16GB,2GB RAM and is expandable up to 64GB through a dedicated Memory card slot.

It has additional features like Fast battery charging, MP3/AAC+/WAV/WMA player, MP4/H.264/WMV player, Photo/video editor and Document viewer. This mobile is available in Black and white colours.

Moto G Turbo’s features include an octa-core processor, Advanced water resistance, 13MP camera, and 4G speed it would be a better option for the user.  But, it has some flaws and they are limited expandable memory (i.e., up to 32 GB only), Non-removable Li-Ion 2470 mAh battery and more.

Motorola Moto G turbo price in India is around INR 10,000. 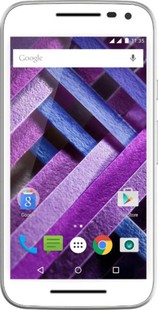