Adding another gem to the Moto E series, the Lenovo-backed Motorola has decided to bring forward the Motorola Moto E4 that will run on Android v7.0 Nougat operating system and has other enticing features as well. Even though the rumor about the price of this phone is that it won’t cost the user a fortune, the specifications are really something that can even give premium quality phones a healthy as well as long-lasting competition.

16GB internal memory and can be expanded up to 128 GB.

Weighing around 131 gm, this smartphone comes with a 5-inch IPS LCD display that shall be enough for watching movies or playing games. Ensuring 720x1080 pixels screen resolution, this product also has a capacitive touch screen and features multi-touch display.

With a 5MP + 8MP camera unit, it certainly will make the selfie-lovers happy. It is enabled with LED flash as well. Features like Autofocus and the option of video recording only enhances its opportunity to be regarded as an efficient low budget phone.

Adorning itself with an internal memory of 16GB, this smartphone works with a 2GB RAM unit. It can be expanded up to 128GB using a microSD. Hence, rejuvenating scope for the user to store necessary documents and media related files at ease.

The 2800 mAh Li-ion battery paves the path for the user to be sure of having power backup throughout the day as discharges ion cells at a lower rate when compared to others. However, the battery can’t be removed though.

To ensuring smooth functioning, this smartphone has been decorated with a Quad-core processor and Qualcomm Snapdragon chipset that is able to offer a frequency up to 1.4GHz. Android Nougat has been incorporated in this phone in a bid to provide the user with an amazing 3D graphic experience. The Android Nougat also makes it easier for one to have faster speed and an efficient notification display. It could save battery as well when not in use with the help of its DOZE technology. The Motorola Moto E4 price in India is estimated to be around INR 8999/-

The Motorola Moto E4 also has a plethora of pleasing features like proximity, accelerometer, gyroscope, ambient light, and more. Besides having Dual SIM configuration, this smartphone has 2G/3G/4G/USB v2.0/WiFi connectivity and also is GPS enabled.

Even though one could offer a statement of dissatisfaction about the capacity of the non-removable battery present in the Motorola Moto E4, the matrimony of features like 5MP+8MP camera unit, Android Nougat operating system, 16GB inbuilt memory with 2GB RAM makes this phone worth a try.

Motorola Moto E4 full specs and reviews as of May 2022. Buy it here! 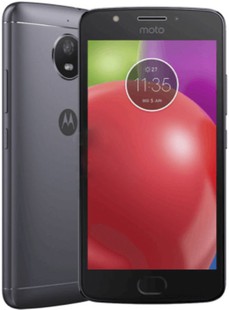