Recent years have seen a hike in Motorola’s smartphone customer base expansion after the release of Moto G, Moto G 2nd, 3rd and 4th Generation along with Moto E, Moto G4, Moto Turbo and more. The release of Moto E3 Power in September has been awaited by those smartphone users who still prefer smaller smartphones over tablets and Notes.

The Motorola Moto E3 power comes with a Mediatek MT6735P chipset, Quad-core 1.0 GHz Cortex-A53 processor, and the Moto Graphics is powered by a Mali-T720MP2 GPU. This combination is topped with 2GB RAM for those seamless multi-tasking and lag free android experience.

The Motorola Moto E3 power smartphone comes with internal storage of 16GB and can be expanded up to 32GB through a dedicated memory card slot. The downside to this is that the user wouldn’t be able to store lot of data more than 32GB.

The Motorola Moto E3 Power comes with a 5-inch screen with a screen to body ratio of 70%. The IPSIPS LCD capacitive touchscreen supports the 16M colour code and produces a display resolution of 720x1280 pixels with pixel density of 294 ppi. This is a protected by a corning gorilla glass.

The Motorola Moto E3 Power price in India is justified with the features and specifications it has to offer. The Android v-6.O and the Octa-core processor along with the 2GB RAM, gives you the freedom to spend your free time in high end games and binge watching movies in the 5 inch screen. Features like Touch anywhere to capture, water repellency and more make this a perfect buying option for under 10,000 rupees. The Moto E3 Power competes with Coolpad Note 3 and Lenovo Vibe K5

Motorola Moto E3 Power full specs and reviews as of May 2022. Buy it here! 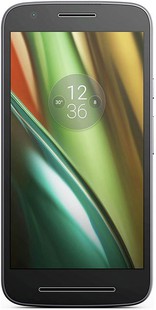