Micromax is an Indian consumer Electronics Company headquartered in Gurugram, Haryana. The company was established as an IT software company operating in the embedded devices domain; it later entered the mobile handset business. By 2010, it was one of the largest domestic companies making handsets in the low-cost feature phone segment in India. As of Q3 2014, Micromax was the tenth largest Smartphone vendor in the world. In Q4 2015, Micromax's shipments fell by 12.1%, against growth of 15.4% for the mobile sector. Micromax's share of the Smartphone market fell to 13% in Q4 2015 from 22% at its peak in 2014. The company is facing stiff competition from the Chinese companies that entered the Indian market.

The Micromax Vdeo 4 comes with an 8 MP primary camera and an 2 MP front camera.

Also, the primary camera comes with a Geo Tagging, Autofocus, and other features. It boasts of Digital Zoom, Auto Flash, Face detection, Touch to focus, and HDR.

The video recording quality can go up to 1280x720 @ 30 fps. The camera takes great photos which are very dynamic.

The Micromax Vdeo 4 packs a removable Li-ion battery with the capacity of 4000mAh that lasts Up to 24 hours. For this price, the battery of Micromax Vdeo 4 is mind blowing.

The Micromax Vdeo 4 comes with a 5.0-inch IPS LCD display which has the 720 x 1280 pixels Display. The screen has a protection layer of the Corning Gorilla Glass (unspecified version).

The capacitive multi-touch screen has the pixel density of 294 ppi. This is one of the best displays out in the market.

Though it is a very basic phone, it has an amazing battery life. It would be a great replacement phone or a gift for someone getting used to a Smartphone.

Micromax Vdeo 4 full specs and reviews as of Dec 2022. Buy it here! 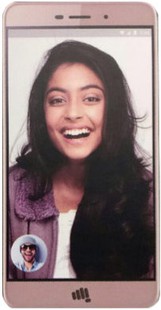