The price of Micromax Canvas Fire 4 is INR 3999. Like the Canvas Fire 3, this phone also comes with fired up speakers on the front side of the phone. Features of the Canvas Fire 4 that make it better than the previous version is its 2000 mAh battery and updated camera functions.

The specifications of the Canvas Fire 4 include an internal memory of 8GB that is expandable up to 32GB. The phone has a Quad-core processor that is powered by Android Lollipop (v5.0). It has 1GB RAM, just like the previous version of the phone.

Coming to the camera, the primary camera is updated to 8 MegaPixels. Features of the primary camera include exposure compensation and ISO control. Other than that, features like digital image stabilization, face detection, and auto flash are also added to the phone camera.

Design of the phone does not have any major changes. The display is 4.5-inch with a capacitive touchscreen. Canvas Fire 4 also offers Dual SIM with 3G connectivity.

To conclude, the price of Canvas Fire 4, more or less remains the same with updated battery capacity and the phone camera, as mentioned above. If you liked Canvas Fire 3, you would also enjoy using Canvas Fire 4.

Micromax Canvas Fire 4 full specs and reviews as of Jan 2023. Buy it here! 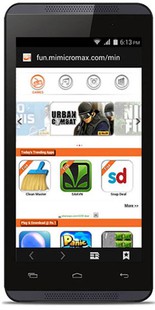