Have you ever considered own an old device? If you are considering now, then, this might be a handset that you’d like to own. Released under pilot project of Google’s Android, Micromax Canvas A1 is one of the first smartphone introduced under Android One program along side handsets from Spice and Karbonn mobiles. Powered by a Quad-core processor, which is paired with a 1GB RAM and 4GB internal storage, this Android handset should give decent performance. There is scope of storage expansion via microSD card slot. Talking about the camera specifications, it packs a 5MP shooter and a 2.4MP snapper. It runs on Android 4.4.4 OS, which is upgradable to the next Android stable version. All this is powered by a 1700 mAh capacity battery, which is decent enough to last a day.

Micromax Canvas A1 full specs and reviews as of Jul 2022. Buy it here! 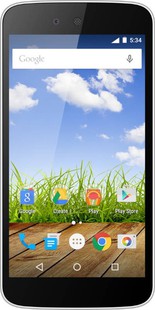