Micromax is an Indian mobile manufacturing company that has been in existence for quite some time now. It has fared well in the Indian market and has emerged as on the highest selling brand in the low and the mid-price segment.

Micromax Bolt q332 has a 4GB internal memory and can be expanded up to 32GB. It has a 5-inch display and a battery that ensures approximately 6 and half hours of charge. Micromax Bolt q332 price is 4135 INR in the Indian market.

The internal memory provided is on the lower side. In Karbonn A108 Plus the internal

memory is 16GB which is priced around the same price range. Also, it runs on the not so recent Android version 5.1 which is the Lollipop.

It runs on Quad-core processor with a frequency of 1.3GHz. The operating system on this phone is Android 5.1. Micromax could have possibly done better in this area.

Micromax Bolt q332 camera quality is decent. The phone comes with a 5mp rear camera and a 2MP secondary camera. It also has LED flash and supports Geo-tagging. The video recording on this phone can be done with the help of 720p.

Micromax Bolt q332 design is a trademark of the brand. Micromax always comes up with rectangular phone which has an easy going look about it. These phones have been a huge hit within school and college going students. The lower bezel is not that large and does not contain the main navigating buttons. Micromax has included them on the screen itself. The secondary camera is placed to the top right corner of the phone and the proximity sensor is placed right beside the ear piece. The rear camera followed by the LED flash is present right in between of the top bezel in the back. The Micromax logo follows them. The speaker is placed in the back of the lower bezel. The volume rocker and the power button are placed one after the other in the left-hand side of the brim of the phone.

Micromax Bolt q332 display is of 5.0 inches which is very generous for a phone in this price category. The screen resolution is 480 x 854 pixels and the pixel density is 196 ppi. The screen to body percentage of this phone is 66.7%. Micromax has given a IPS LCD display along with a capacitive touchscreen. It also has the multi-touch feature.

Micromax has been a bit chintzy in this area and has given a 4GB internal storage which can be expanded up to 32GB using a microSD card. It comes with 512 MB RAM.

It has impressive removable Li-lon battery of 2000mAh. It sustains charge up to 6 hours-30 mins of talk time. Micromax Bolt q332 battery is an impressive one.

With the brand value and the set of features that this phones comes with has made it a phone worth purchasing. You can also compare with many other companies that produce phones at the same range such as Meizu, Gionee, and Xiaomi. 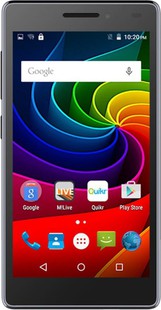