Micromax is one of the most widely used smartphones whose origins are in Indian. This Indian brand has its products being sold extensively in fields like tablets, laptops, tablet-laptops, feature phones and televisions apart from smartphones.

The 1.2Ghz processor, 5MP primary camera with LED flash with 720p video recording are one of the prime features that sets the Micromax Bolt Q331’s price apart in the when compared to the other phones in this price.

The 2000mAh battery still does a fair job, but an improved battery would have increased standby time and talk time over varied connectivity types.

The Micromax Bolt Q331 runs on an Android OS, v4.4.2 (KitKat) operating system which is powered by a Spreadtrum 7731G chipset and a Quad-core 1.2 GHz CPU.  The 512MB RAM does a good job at doing what’s expected of it.

Battery:The Micromax bolt q331 mobile is powered by a removable 2000 mAh lithium ion battery. The standby of this is 200 hours has a talk time capacity of six hours. The battery could have been improved, that would definitely make this as a choice for a  spare phone for a few for a few who are into extensive smartphone use.

The Micromax bolt q331’s specification includes storage capacity of 4GB internally which can be expanded up to 32 GB.

The Micromax bolt q331 has a 5 inch IPS LCD capacitive touch screen which produces a display resolution of 480 x 854 pixels with a pixel density of 196 ppi. This screen exhibits multi-touch functions.

The primary camera of the Micromax bolt q331 is a 5MP unit which is connected to an external LED flash.  This camera is capable of capturing videos of 720p picture quality. Geo-Tagging feature is an add on to this. The secondary camera installed is a 2Mp unit.

The Micromax bolt q331 price is justified by what it has to offer the user. This phone is designed for those who are just shifting from a feature phone to a smartphone and are not inclined to use high end games and watch HD movies on their phones. 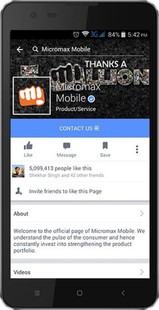