Meizu Technology Co., Ltd. is a consumer electronics company based out of China. Meizu began as a producer of MP3 players and later MP4 players. In 2008, Meizu moved its attention to Android phones. Today, Meizu is the 11th largest Android phone manufacturer in the world. Meizu M6 is the latest addition to their product portfolio and is the successor to the Meizu M5. The smartphone ships with regular hardware as is the case with most budget smartphones.Meizu M6 price in India starts from Rs. 6,999 and expected to be rolled out in January 2018.

In terms of hardware, a 1.5GHz Octa-core MediaTek MT6750 Soc drives the smartphone. This is assisted by 2GB  RAM and a Mali-T860 MP2 graphics processing unit. The RAM ensures that mobile phone users get a seamless and lag-free Android phone experience. As well working on more than two apps at the same time shouldn't be a problem. The Meizu M6 boots on the Android 7.0 Nougat OS out of the box.

The Meizu M6 Meizu M6 features a metal unibody design and a 5.2-inches IPS LCD HD display.It as well comes with a screen resolution of 720p that provides a pixel density of 282ppi.

The Android phone flaunts a polycarbonate plastic back panel with a front-mounted home button which as well serves as a fingerprint sensor. The fingerprint scanner enhances the security of the device.The phone display is combined with decent viewing angles and also outputs decent legibility even under the sun. But, Corning Gorilla Glass protection is not available to prevent scratches. Connectivity functionalities  on the phone include GPS, Bluetooth 4.1,4G, Wi-Fi 802.11 a/b/g/n, and a micro USB 2.0 port. The device as well can support two SIM cards that permits you to use two networks at the same time.

In terms of optics, the smartphone is armed with a standard 13-megapixel rear and an 8-megapixel front-facing shooter for imaging and recording videos, You can shoot images, videos, make video calls and click selfies. The rear camera can be used for low-light photography also thanks to the availability of an LED flash.

On the storage ground,   the handset features a 16GB default storage which is expandable up to 256GB by via a memory card. You can comfortably store apps, songs and other files in the default storage.

The Meizu M6 flaunts a 3,070mAh Li-ion unit which runs the show for long hours.

The Meizu M6 is an attractive and stylish device featuring a powerful processor under the hood. The smartphone is armed with a decent main camera which can shoot high-resolution pictures and can shoot high-definition videos as well. The battery backup is as well great for regular usage. However, you can anticipate a better RAM at this price point. 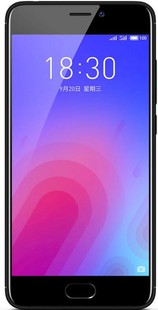