LG X 500 has all the features which you might be looking for in a budget smartphone. The phone was launched in June 2017 and te LG X500 price in India is around INR 18,500 which seems expensive with all the features it has. The highlight of this phone is its incredible battery backup that it has. It is powered by a non-removable Li-Ion battery of 4500 mAh capacity.

As mentioned earlier the USP of this phone would be its battery backup which can deliver you up to 20 hours of continuous video playback in a single charge. This phone runs on the latest Android 7.0 Nougat.

Some other features include:

· Sensors on the phone include a Proximity sensor, Accelerometer sensor, Ambient light sensor, and Gyroscope.

· Supports up to expandable memory 2TB.

LG X 500 has only 2 GB RAM which degrades the overall performance of the phone. At least 3GB RAM was expected. The phone would lag on playing high definition videos and games. Running multiple apps in the background would impact the overall performance of the phone. Multitasking would not be smooth and the user might experience a transition delay.

LG X 500 has comes with an Octa-core 1.5 GHz processor which is pretty decent. Under the hood, this phone has only 2GB of RAM which would impact the overall performance of the phone. A phone at this price, one would expect something more.

LG X 500 comes with a 13 MP of primary camera with LED flash light and 5 MP of front camera for selfies. High definition video recording is available in 1080p at 30 frames per second. Other feature includes Geo tagging and support for multi-mode image capture.

LG X 500 has a non-removable Li-Ion battery of 4500 mAh capacity which can deliver you up to 20 hours of continuous video playback in a single charge.

LG X 500 has an inbuilt memory of 32GB which can further be extended up to 2TB via microSD which is incredible.

LG X 500 is a complete package for a music lover or for those who like to browse the internet. The phone has an incredible battery backup and a mammoth storage capacity which enables you to store all your files and videos on the phone itself. However, that might make your phone a little slow. The camera quality is pretty decent, UI of the phone is quite similar to the other phones in this series. 2GB RAM could be a deciding factor for most of the people as at least 3GB was expected in a phone of this price. 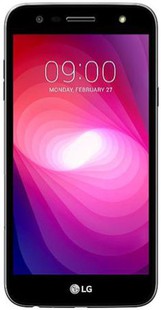