LG caught us a bit off-guard with its X series of mobiles, here we look at the fastest of them all, the LG X Mach a flagship class with unique features aimed at those looking for top- level performance, but while hoping to pay less. The name X Mach makes this LG phone sound like it’s a fighter pilot's futuristic smartphone. Let’s get into the details of the specs to find what is in store to make this LG X Mach a phone to look out for.

Battery life could be better.

The LG X Mach is powered by a Qualcomm MSM8992 Snapdragon 808 processor. Running on Android OS, v6.0 (Marshmallow) and the processor runs at a speed of 4x1.4 GHz, 2x1.8 GHz. This Android Marshmallow phone is faster than any other in its category. That’s because it boasts the new LTE- Advanced standard, LTE Cat.9 3CA.

The LG X Mach is equipped with a 12.3 Megapixel primary camera and a 8MP selfie camera. The camera supports HDR , Geo Tagging, Face Detection, and Panorama. The Video recording is at 2160 at 30fps. The Camera does support Auto Focus feature as well. The prime camera captures large 1.55mp for better low-light photos.

The LG X Mach packs a removable 3000mAh Li-ion battery. The Battery lasts 6 hours of browsing time which could make for an average battery life if placed on a charge schedule whenever possible. It could support well on the talk time and internet usage all through the day.

The LG X Mach comes with a  32 GB of built- in storage, of which 23 GB is available to the user and gives an option to expand up to 256GB via microSD card.

The phone supports LTE-A Cat 9 (450/50 Mbit/s) and, naturally, has NFC, Bluetooth, and Wi-Fi 802.11 a, b, g, n, ac. The LG X series basically takes big features from other LG phones and fits it inside a more budget-friendly handset.

The LG X Mach looks like an upgrade of LG’s G4, with Fingerprint Scanner and a new LG UX interface, which looks like it’s undercooked in some spots. We could say LG X Mach is a quality midranger. Unfortunately, LG hasn’t revealed the price of the phone yet. 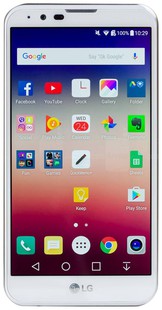