LG is taking a new road this year, it is called G7 ThinQ. Adding the new moniker, the South Korean electronics giant is all set to introduce its latest flagship iteration. Reportedly, the LG G7 ThinQ specifications and renders are leaked online, which means you can have the early peek at what to expect on the upcoming LG flagship smartphone. Let’s talk about it briefly.

There are drastic changes ready to be experienced on the upcoming LG flagship smartphone. The G7 ThinQ will sport a notch on top and will have a rear camera setup in a vertical format in the centre, unlike iPhone X. Expect an IP68 rating, which will make it dust and waterproof. Plus, the aluminium body and glass coverage over the body will attract shiny and sturdy look.

LG knows best when it comes to display requirements of the premium consumers. Which is why the company has a 2K display resolution panel ready to rock on the G7 ThinQ. Complying with industry trends, the brand is going to introduce a display setup like iPhone X with the notch. This will increase the aspect ratio to 18:9 aspect ratio, thus, offering the immersive experience. Further, the screen would be complaint with Dolby Vision, HDR10, and Always-on feature.

Powered by a Qualcomm Snapdragon 845 processor, which is the most powerful chipset available in the market. Offering the processing power you’d require for smooth gaming and multitasking, this LG smartphone will come equipped with a 6GB RAM and 128GB storage.

Details about the camera setup are scarce, what we know so far is that the rear camera would sport a dual lens setup. The primary camera resolution might be 16MP whereas the secondary lens might be of 8MP resolution. LG is going to up their game of aperture, which would ensure the great details even in the low-light. Whereas the selfie game would include an 8MP resolution camera.

LG G7 ThinQ might massively lack the battery capacity, as the reports claim that it might come with a 3000 mAh capacity battery. This might not be enough to keep the high-powered chipset and high-resolution display despite optimization.

Should you wait for this device to get released in India? Well, you might end up purchasing it if you wait for it. Because it was almost everything one can expect from a premium smartphone. It’s totally up to you that you wait for it or not to release in India. 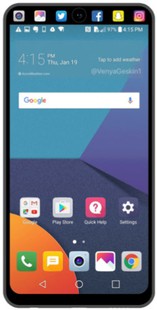