The Lava Z25 was launched in India in the month of March in 2017. The price of this handset device in India starts from Rs. 16,990. It operates on a MediaTek MT 6750 Octa-core processor with a frequency of 1.5GHz and the device has a very impressive and efficient 4GB RAM. The device has an internal storage capacity of 32GB, which can be expanded up to 128GB by using a microSD card.

- It has a very impressive 4GBs of RAM.

- It has a powerful and long lasting 302 0mAh battery.

- Its camera can record videos at 1080p quality.

- It runs on Android Marshmallow.

The device uses two SIMs at once (dual SIM), but the drawback of this is that the handset only accepts a GSM-type SIM card. Also, accepts Micro-SIMs and Nano-SIMs. Regarding connectivity, options include USB, Headphones, Wi-Fi, GPS, Bluetooth, FM, 3G, and 4G

The Z25 is built keeping in mind the fact that it is a competitor with phones like the Lenovo Zuk Z2, and it does not disappoint on build quality. With a Curved 2.5D display and its lightweight metal body, the phone has a premium finish. The screen is an IPS LCD Capacitive Touchscreen, with a resolution of 720 X 1280 pixels and a pixel density of 267 ppi.

The flagship has an impressive rear shooter of 13 Megapixels, whereas its front shooter is at par with other devices available at lower costs, as the front camera is only a 8 Megapixel unit.

The handset is packed with an internal storage capacity of 32GB, which can be expanded up to 128GB by the use of a microSD card.

This smartphone has a decent battery life, due to the fact that it incorporates a 3020 mAh battery, which is powerful and long lasting.

In conclusion, the Lava Z25 is a device which is a serious competitor in the midrange market and feels like a flagship device which has a long lasting battery. Another plus point is the fact that it has a very fast fingerprint sensor, which is not seen very often among phones in this price margin. A negative feature of this device is that it runs on an older version of Android OS, whereas other devices released around the same time feature the newer Android Nougat. 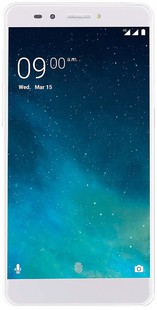