The Lava Flair E2 is an entry level smartphone for people who want to upgrade from feature phones. The usage however remains basic due to the low RAM and configuration. We are not complaining as it is unfair to expect much at such a low price. The choice is yours, if you want something better than a feature phone but not towards the high-end range, go for it. The Lava Flair E2 is priced at INR 2779.

The Lava Flair E2 sports a 3.5-inch touchscreen display. It is slightly bigger than a feature phone which makes it compact and easy to carry around. Resolution is almost like a feature handset as well at 320 pixels by 480 pixels. Coming to the processor, it has a 1GHz unit supported by 256MB of RAM. Only one application at a time can be handled by this phone. Internal storage is only 512MB but good news’s present, you can expand it up to 16GB. For occasional pictures, you can use the 2MP rear camera and the 0.3MP front camera. Connectivity is good enough when in Lava Flair E2. It has WiFi, GPS, 3G, and bluetooth along with all major sensors. Finally, fuelling all these functions is a 1400mAh battery that serves for about 7 hours. 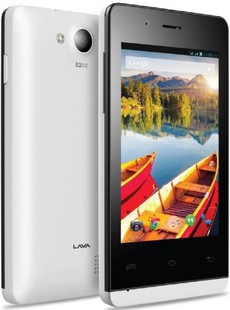