Eastman Kodak, as well known as Kodak, is an American firm specializing in imaging solutions and services. Once the leading manufacturer of film cameras, the company slowly vanished with the advent of digital cameras. Of late, it has introduced an Android smartphone. dubbed Ektra. Kodak Ektra price in India starts from Rs. 19,990 and was released in July 2017.

In terms of hardware, the device flaunts a strong Deca-core processor clocked at 2.3GHz  and seated on a chipset of MediaTek Helio X20.  This setup is supported by a 3GB RAM and a Mali-T880 MP4 GPU which enable high-end gaming and multitasking for a flawless experience.The Deca-core processor strikes a good balance between efficiency and performance. Talking about the software , the Kodak Ektra comes with Android 6.0 Marshmallow OS.

The primary camera is the key appeal of the Kodak Ektra. The handset is fitted with a marvellous   21MP primary camera that is further supported by functionalities like phase detection , Exmor-RS CMOS sensor, 2.0f aperture, exposure compensation , dual LED flash , ISO control, etc. It as well sports 6-Axis optical image stabilisation (OIS) to minimise shake while snapping images and shooting videos. Phase-detection autofocus (PDAF) supports in focusing. The camera is armed with a non-reflective coating on top of the lens to eliminate lens flare. The combination of all this supports you to snap superb quality images of 5,288 x 3,968 pixels. Besides, the primary camera can capture HDR images and 4K videos. The secondary camera on the front is a 13 MP piece  and serves as a  nice choice for selfies and video telephony.

The Kodak Ektra is an unusual Android device when it comes to looks. The handset appears to be a combination of a digital camera and smartphone. The back of the handset flaunts a leather finish and a large camera cutout. To ensure a comfortable usage while snapping images and videos, the bottom of the handset is equipped with a concave contour. The phone features a 5.0-inch touchscreen IPS LCD display while pixel density is 441ppi. The Full HD resolution (1080*1920 pixels) ensures a sharper picture. The handset is sold in black colour variant.

The native storage capacity is 32GB and comes with a MicroSD card for upgrading storage..

The Kodak Ektra is powered by a 3000 mAh unit and has the option for Pump Express fast charging.

After their successful track record  in the camera segment for a quite long period , Kodak has entered the smartphone industry. No need to say, the cameras of this Android phone are at par with the lens on the shoot cameras and digital point.In addition to the shooters, other specifications in the handset are also attractive, be it the performance or the display. So if you are keen to buy a powerful device, with nice cameras, this is perhaps the finest option for you.

Kodak Ektra full specs and reviews as of Jan 2021. Buy it here! 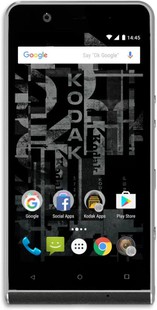