Karbonn Mobiles is a joint venture firm of Jaina Group based out of Delhi and UTL Group headquartered in Bangalore. It is a manufacturer of feature phones, Android smartphones, tablets and mobile phone accessories. Its one of the largest smartphone producers in the country. Karbonn mobiles were one of the three smartphone makers to first introduce Google's Android One initiative to the Indian market. Karbonn Titanium Vista FHD is the latest addition to the impressive product portfolio of Karbonn mobiles and the handset was rolled out in November 2017. The Karbonn Titanium Vista FHD price in India starts from INR.4833.

Inside the gadget, there is a Quad-core processor which clocks at 1.3GHz and is housed upon a MediaTek MT6580 chipset. This setup is mated with 1GB RAM. The Titanium Vista FHD enables you to run apps in a faster and smarter manner. Its super fast processor and large screen delivers an awesome gaming experience. In terms of software, the device boots on an Android v6.0 (Marshmallow) operating system.

For image lovers, this latest Karbonn handset is armed with an 8MP main shooter and a 3.2MP front-facing snapper. Its high definition primary camera has features like Auto Focus and powerful flashlight and mankes Titanium Vista FHD a marvelous everyday camera. With the availability of flash, bright pictures can be snapped even in low light conditions.

When we talk about the display, the Karbonn Titanium Vista FHD has a 5-inch Full HD IPS LCD display. The screen has a resolution of 1080 x1 920 pixels which results in a pixel density of 293 ppi. and. As the device uses IPS LCD display technology, the display sharpness is evident. So, you can see lifelike pictures with more realistic colours. The stunning Dual Tone Sleek body makes sure you enjoy a realistic viewing experience. This Android phone is available in grey colour. This latest Karbonn Android handset has dual SIM (GSM and GSM) and comes with sensors like Ambient light sensor, Proximity sensor, Compass Magnetometer, and a Accelerometer.

To address the storage needs, the device boasts of an internal storage of 8GB which is further expandable up to 32GB via a microSD card. You can use this memory for storing large files which include songs, images, videos, apps, and presentations.

As far as the power source is concerned, the device derives its energy from a Li-Ion 2,300mAh unit which makes sure the show runs for more hours.

The Karbonn Titanium Vista is a fine choice for people who require a full HD mobile phone and have a limited budget. The quality of the display is very nice as the Android phone commands a high pixel density. But you can enjoy only limited multitasking as the RAM is very low. 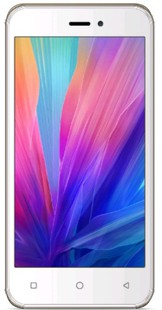