Features of Karbonn Titanium S25 Klick include a 5-inch LCD display with a resolution of 1280 x 720 pixels. The front camera is an 8 MegaPixel unit while the rear camera is 15 MegaPixel unit with an LED flash and Autofocus. Video recording with a resolution of 1920 x 1080 pixels happens at 30 fps. Aesthetics of the phone are sharp and sturdy. This chassis comes in a matte grey color.

When it comes to connectivity, the phone supports 3G connection and has Bluetooth version 4.0. The processor of Karbonn Titanium S25 Klick is Quad-core unit that’s clocked at 1.3 GHz frequency. The operating system is Android KitKat. The phone has large storage (8GB internal; 32GB expandable on MicroSD card) and 1GB RAM. It has a powerful battery (2000 mAh) with micro USB resulting in fast charging and long lasting battery.

Karbonn Titanium S25 Klick is competing very well with other phones in the same price range. But it can do better with its RAM and storage capacity. 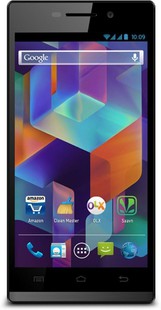