Karbonn is known for its affordable and innovative devices in the market for almost a decade now. Starting with feature phones it slowly and steadily reached the top. Now manufacturing all sorts of affordable and trending devices, it has become one of the top most companies.

Karbonn recently launched its Alfa range of smartphones, which are trendy and light both in your pocket and budget. The Karbonn Alfa A122 is one such device in this range.

The device is affordable, has decent battery backup, and a good storage capacity. The handset provides the taste of Android to users at a very low price and is good at performing all the basic Android functions.

The handset features a 4-inch TFT display with a screen resolution of 480 x 800 pixels, at a pixel density of 233 ppi. Housing a 1GHz Single-core processor coupled with 256MB RAM, the configuration proves to be below average. The device is available in Black color and features a G-Sensor.

Boots on Android 4.2.2 Jelly Bean, the handset gets its power by a 1300mAh Li-ion battery, which the company claims deliver 3.8 hours of talk time and 180 hours of Standby time. Equipped with a 2MP primary camera with LED flash and digital zooming, it features a 0.3MP secondary camera for selfies and video calling. Talking about the storage, the handset comes with 512MB of internal storage, which can be further expanded up to 32GB via a MicroSD card. As far as the cameras are concerned it offers Bluetooth, Wi-Fi, HotSpot, dual 3G network, GPRS, and a USB port. 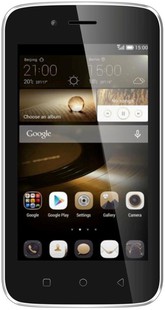