Karbonn is an Indian based company which came into existence after the Jaina Group and the UTL group came together in a joint venture. Karbonn is one of the first three companies in India which introduced Android One in India.

Karbonn A108 best price in India is 1999 INR which is a very low budget phone. Karbonn has managed to pack it with some good features even within this price range. It comes with an internal memory of 512mb and gives the customer an option to expand it to 32GB using a microSD card. It has a display pixel density of 239 ppi.

Very rarely do you get a phone of this price with a touch screen and a good display. You might want a bigger display size but then again this is a low budget phone and needs to be compromised on a few areas.

Karbonn A108 processor is a Dual core one with a Chipset of MT6577. It supports an architecture of Cortex A9 and has a GPU of PowerVR SGX531u which has a frequency of 1.0GHz. Overall this phone has a decent processor considering how much is being charged.

Karbonn A108 camera review is that it has managed to add a dual set of cameras to this phone. It has a 2mp rear camera and the secondary camera is VGA one. It does support video recording. The other camera features are the Flash and Digital Zoom.

By the looks of it, Karbonn has managed to add in a lot of features that you would expect from a touchscreen phone. It looks like any other touch phones just with in a smaller case with a slightly small display. In low budget phones not a lot can be expected from the design point of view. Karbonn A108 has the capacitive buttons on the lower bezel. The secondary camera is placed just beside the spear in the left on the upper bezel. The side bezels are quite wide but overall it looks good and not out of place. The back of this phone is smooth and has the rear camera placed exactly in between of the upper bezel and the LED flash is just below it. The speakers are placed in the bottom left corner at the back.

It comes with a 3.9 inches display with a screen resolution of 320 x 480 pixels. It has a TFT display type with a pixel density of 239 ppi. In fact it also supports multi touch.

It comes with a basic storage of 512MB but also has an option to expand the storage up to 32GB by using a microSD card. The RAM added is of 256MB.

Karbonn A108 Battery is a 1400mAh Li-ion battery. The battery is removable and has endurance of up to 4 hours on 2G.

Karbonn has stood to its name by proving the best in its category . You can also compare with many other companies that produce phones at the same range such as Meizu, Gionee and Xiaomi. 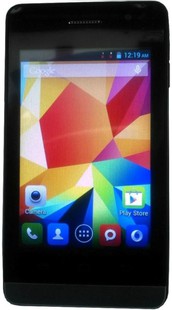