Intex Technologies, founded in 1996, is an Indian Smartphone, consumer durables, and IT Accessories manufacturer. Intex’s headquarter is in New Delhi, India.

The Intex Aqua Raze II comes with a 5MP primary camera and a 2MP front camera. Also, the primary camera comes with features like Digital Zoom, Panorama Mode, GIF, you click images using the volume button, slow motion video. The camera is a very basic camera and the camera doesn’t have too many fancy features.

The Aqua Raze II packs a non-removable Li-Po battery with the capacity of 1750 mAh. The company claims that with a full charge, the battery can last up to 10 hours on a full charge.

The battery life is quite decent for a phone like this.

The Aqua Raze II comes with a 4.5-inch IPS LCD display which has a resolution of 480x854p. The capacitive touch screen has the pixel density of 218 ppi. This is the best display anybody can offer at this price range. The picture quality is a quite pixelated.

The Aqua Raze II comes with 1GB RAM and 8GB internal memory. A micro SD card of 32GB can be fit (max capacity for SD card). The storage capacity is not up to the mark for today’s generation, where one tends to save everything in their handset.

Also, the Intex Aqua Raze II features an Accelerometer. A 1GB RAM limits your multi-tasking capability and would also make the phone lag quite a bit. The phone comes with a dual-SIM slot and also supports Bluetooth 4.0. The Intex Aqua Raze II price is Rs 3,999 in India.

The Intex Aqua Raze II is not the best phone in the market as it does not have most features of this generation and all the specs however if one considers its price Rs 3,999, it is not that bad a Smartphone as there are very few Smartphones in the marker at this a low price. This phone would be great for a quick replacement or a gift to someone who is just getting used to a Smartphone. For any other purposes than these ones, it would be better if raise your budget a little and buy a phone with a few more features. The Intex Aqua Pro and the Intex Aqua Raze II are basically the same phone (give and take a few features) 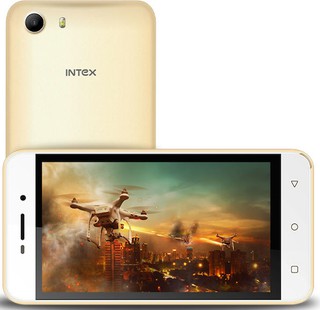