Intex Aqua Fish 4G phone comes with a 16GB internal storage which is expandable up to 32GB. It weighs light at 150 gms and has a 5 inch IPS LCD display. It is powered by a 2500mAh Li-lon battery. The Intex Aqua Fish 4G price in India is 4999 INR.

It has a 2mp secondary camera which is not a very impressive quality but then again this phone is a low budget one and some shortcomings are expected.

Intex has come out with a very low budget but has managed to include some high end features to it. It seems to be a promising phone for a phone of this range and caliber.

The Intex Aqua Fish 4G specs have not yet been released but it weighs 150gms. It is quite a light weight phone if you consider the 5 inch display along with its wide bezels.

Intex Aqua Fish 4G display is quite a generous one with a size of 5 inches. Other Intex Aqua Fish 4G specifications include a screen resolution of 720 x 1280 pixels, a pixel density of 294 ppi, a capacitive display type with an IPS LCD display and the screen to body percentage stands at 67.2%.

Intex Aqua Fish 4G comes with an internal storage of 16GB along with a 2GB RAM. The phone also comes with an expandable memory of 32GB which can be done with a Micro SD card.

The phone comes with a 2500 mAh Li-lon battery and the Intex Aqua Fish 4G battery is also removable.

Intex Aqua Fish 4G phone runs on 4 (Quad Core) processor along with Qualcomm MSM8909 Snapdragon 212 chipset. It has its own operating system named Sailfish OS v2.0. The architecture on this phone is Cortex A7 and has a frequency of 1.3 Ghz. This phone comes with a Adreno 304 GPU.

This is a low budget phone packed with some powerful features in it. Intex is offering a good camera, display and memory in a very minimal price. For a second glance at the Intex Aqua Fish 4G review, you can refer here . You can compare with the other mobile brands such as Forme, Gionee and Videocon which produce budget phones too. 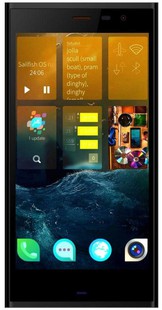