Infinix Zero 5 is a mid-range smartphone brand from Infinix Mobility created for youngsters who love a smart lifestyle. This is another addition to the impressive Infinix Zero series. It is considered as a successor to the widely acclaimed Zero 4 as well as Zero 4 Plus. The Infinix Zero 5 will certainly astound the mobile users with its superior performance, large capacity battery, and brilliant cameras. Infinix Zero 5 price in India is expected to be INR 25,000 and may be launched during November 2017.

In terms of speed, the smartphone is powered by a 2.0GHz Deca-core processor which is seated on a MediaTek MT6797M (Helio X20) chipset. It is combined with 4GB of RAM combined to output great performance and facilitates multitasking. The handset will be booting on XOS based on Android M which supports an upgrade to Android N.

Most discussion on this device has been about its rear shooter. The Zero 5 will be coming with rear camera unit of 21MP which will feature 2x optical zoom. It is rumored to come with a wide-angle lens and a telephoto lens as observed in recently introduced premium Android phones. The rear snapper guarantees brighter and more precise images and is equipped with features such as LED Flash. The secondary camera at the front of the handset packs in a 13MP shooter and comes with options like Zoom, HD Recording etc. At the click of a button, it can shoot clear and vivid selfies and is also useful for video telephony.

It is said flaunt a 6-inch full HD IPS Capacitive display and comes with a resolution of 1920x1280 pixels. The smartphone will feature an edge-to-edge display with little or no bezel and comes with an aspect ratio of 18:9 which is like that of the Samsung S8 and S8 Plus flagships. The display is housed in a metal casing and is expected to be available in Red colour. The Capacitive touchscreen ensures an interactive user experience for the consumers.

The most remarkable feature on the Zero 5 is its 64GB ROM, the largest ever seen on any Infinix handset till now. This implies that mobile users have enormous storage for memories and documents in the form of Text, Image, Audio, and Video and hardly worry about storage space. This is expandable up to 128GB via an SD card slot.

In terms of power, the device sips its juice from a large 4000 mAh Li-ion battery that provides adequate uptime even considering heavy usage. However, the battery cannot be removed.

The Infinix Zero 5 is an awesome device with a splendid display, magnificent performance and an awesome pair of shooters, which make this handset a superb deal. You should certainly think about this handset, if you are keen to buy one at the mid-range price. 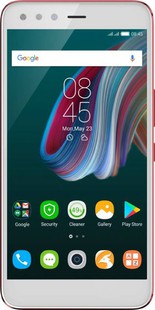